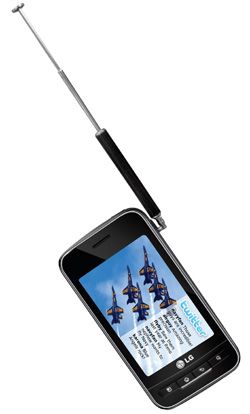 LG Tweet-TV
For a growing number of television viewers, just sitting back and vegetating in front of the TV screen is a foreign concept.

"A generation is consuming media differently. More and more they are consuming it socially," Dick Glover from Funny or Die said. "For my generation, it was sit back in a chair and watch television. For my children's generation, they are so computer conversant, they are going to consume television with friends all over the world."

The 2011 NAB Show Super Session "The Most Innovative Companies: Where TV and the Web Collide" brought together a group of seasoned professionals to examine how social networking is changing the relationship between content providers and their audience.

The session was hosted by David Lidsky from Fast Company Magazine, and included Glover, Twitter's Chloe Sladden and Jason Phipps from FX Networks.

The panel talked about how Twitter and Facebook have created a "second screen," that is now so integrated into the television watching experience that it cannot be ignored.

Citing figures indicating that half of Facebook and mobile device users are watching TV at the same time, Lidsky raised the question, "How does that affect your programming decisions?"

"From an FX perspective, we have always thought about the second screen from the laptop forward," said Phipps. "We think strategically about the two-screen experience and how to compete socially among all those platforms."

Although the concept of interactive television has been around since television began, the advent and soaring popularity of Twitter and Facebook have brought this to fruition on a global social level.

"It's bringing us back to shared experience," said Sladden. "The connection between TV and Twitter shows that people want a sense of connection and sharing something at the same time. It's very powerful."

This has all led to a culture shift, with talent no longer concentrated in Los Angeles and New York.

"For us it's about making the best content and interacting with users," said Glover. "But a large part of the talent pool now includes Palo Alto, [Calif.], because that's where the social media people are. We have to work to get disparate parts in Palo Alto, New York, and L.A. to work together."

The panel also talked about how implementing social networking and Twitter engagement is simple and inexpensive. Sladden describes it as the "three best practices."

"It's so simple to use even the smallest broadcasters can do it," Sladden said. "Just putting a hashtag on the screen will result in a spike in tweets. Next, combine it with a creative call to action. Finally, live tweeting with the on-air talent has really taken off in last few months. These three things do 80 percent of the work to stimulate the audience."

In the old linear world, everything was a very big bet," Glover said. "Experimenting with social media is a small bet. You can just try things and see what works and what doesn't." © 2011 NAB