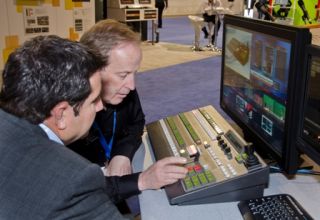 Keep it simple, people. The technology behind the box is anything but, but switcher and router manufacturers at NAB this year came to showcase solutions that kept that simplistic mantra in mind: easier-to-use touchpanels and easy to program buttons conceal technology that is designed to make the control and routing of myriad signals as easy as, well, the touch of a button.

Blackmagic Design showcased the ATEM 2 M/E production switcher with software that adds audio mixing capability, allowing a user to mix embedded audio from SDI and HDMI inputs, plus audio from media players or the switcher’s own external audio input.

Broadcast Pix introduced Video Control Center 3.0 software for its Granite and Mica video control centers, which features optimized production control on a touch-screen as well as voice-automation control of switching and graphics and customizable virtual sets.

The Karrera video production center made its U.S. debut in the Grass Valley booth. The new lower-cost switcher platform comes in two flavors: 4RU and 8RU with frame configurations from 1 to 4.5 M/Es.

Ikegami showcased a new multiformat HD/SD production switcher, the HSS-330, designed for high-end broadcast applications and available in a 3-, 2-, or 1-M/E configuration with up to 48 inputs and 24 outputs. It features a 3RU frame and can be used with an optional RAM recorder and external 3D DVE.

Chad Heupel of the FDA gets a rundown on the Grass Valley Karrera from Bob Crites of Grass Valley.NewTek unveiled TriCaster 8000 for covering live video for large, complex events. The system introduces extensive integration and customization options that include unlimited scalability with third party router support, recordable macros that can be triggered simultaneously, along with extensive effects and graphics capabilities with eight M/E rows.

Panasonic introduced an SDK and API to enable the development of versatile custom plug-in programs for its AV-HS410 HD/SD “smart” switcher, which marks a first for any Panasonic professional video product. V2.0 of AV-HS410 switcher firmware is available as a free upgrade to all HS410 owners.

For the production environment, Sony showcased compact options, like the MCS8M compact audio/videomixing switcher, as well as 3D-capable switchers such as the multiformat MVS-7000X.

The latest release of the WO Master Control solution was demoed by WideOrbit, which showcased how the system can provide up to 16 channels of HD/SD, master control switching, graphics, automation and storage in a single IT server rack.

ROUTING & CONTROL
With an eye on smart pricing, Blackmagic Design showcased its line of routers and control panels, including the Micro Videohub, Smart Videohub and Compact Videohub, all designed to offer 3 Gbps SDI routing in a compact size.

DNF Controls showed off its new Production Control Application, which is part of the Flex Control Network for control of video and graphic playout devices. The company also showed the new Tally Control System.

For those in the live production arena, Evertz showed off the next-generation of the MAGNUM control system.

Harris showed off its brand of Platinum routers, which feature multiviewer signal processing and monitoring, audio mux/demux, and frame synchronization.

Orad’s new TD Control solution, designed for news, sports and fast-turnaround events, can allow a technical director to switch on air from six video sources to different sources with the click of a button.

A new 4RU version of the Vega routing platform made its debut in the Snell both. Offering fiber or coax connectivity, the Vega is a 192-port device that allows users to configure signal ports independently. Snell also showed off new hybrid processing technology that’s part of its Sirius 800 series of routers. The new Sirius 830 was on display, a 15 RU model.

New additions to the Thor-S KVM switcher product line were on display by Telecast, including the Thor MR 8X8 HDMI and DVI matrix routers.

Thinklogical expanded its video routing options with the MX48 router, a compact, high bandwidth, protocol-agnostic solution for end-to-end routing of video and peripheral signals over multi-mode or single-mode fiber-optic cable.

Thomson Video Networks launched a new version of the Amethyst III redundancy switcher with four gigabit Ethernet interfaces. By adding a new IP interface to its existing ASI one, the Amethyst III allows operators to migrate to an all-IP architecture.

Utah Scientific showed off the new UCP-LC control panels for the UTAH-400 series of routing switchers, which offer 16 or 32 buttons in a 1RU package, and a 3RU panel with touchscreen LCD displays.