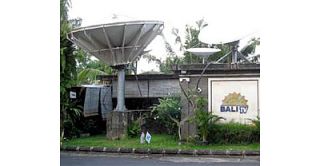 With a population of three million, the Indonesian island of Bali is well-known for its art, but very few of its artists have any background in television production. Although it now has five competitors, Bali TV was the first local TV station on the tropical island, starting transmissions on May 26, 2002. Currently, there are around 300 people working at Bali TV, with about 50 of them working as cameramen, of which 15-20 deal with news.

Ms. Dewa Ayu Dewi Martika is the Director of Programs and News at Bali TV, which was the first privately-owned (by the Bali Post newspaper group) television station there, located in the island’s capital, Denpasar.

She explains, “We broadcast mostly cultural programs , for 18 hours a day. Most of the transmissions are in Bahasa Indonesia (language), with some in Balinese and some in English. On our seventh anniversary, in 2009, we began putting some of our programs on the Internet too, because there are many Balinese who are working overseas now.”

Currently the station has just one 5Kw transmitter, adjacent to its studios. There are no repeaters, so this year Bali TV will start using a new, bigger, transmitter, in the hope that it will help the station reach a wider audience, particularly those in the north of the island, like in the town of Singaraja, where coverage till now has been patchy.

Ms. Dewi said the new transmitter will be a 10 Kw unit purchased from German manufacturer Plisch. “Our competitors have 5Kw transmitters also, so we need to beat them, by being able to deliver better reception to our viewers than them.”

Some viewers use a “parabola”, a satellite dish, to receive Bali TV and many other stations, but they are relatively expensive, at around US$650. “Not everyone can afford them,” says Dewi, “so we have to provide a way for viewers to be able to receive our terrestrial signals well.”

Ms. Dewi Apart from the transmitter, in the pa s t year Bali TV bought several other pieces of equipment. “For instance,” says Dewi, “we replaced our original outside broadcasting equipment with an Explorer satellite communicator, or data terminal, transmitting via INMARSAT, because we find that with that, it is very easy to cover live events and news reports. Made by Thrane & Thrane, it’s a very robust device, comprising a single unit incorporating a transceiver and an integral antenna in a highly compact design.”

The Explorer 700 which Bali TV uses is a small, highly portable piece of equipment that sends data via a dish which is about the same size as a large laptop. “Its simple format makes it convenient to take it along wherever we go,” says Dewi. “I really recommend it for live coverage, as it’s not only a very simple piece of equipment but very affordable too.” With streaming up to 256Kbps on INMARSAT’s BGAN network, Dewi believes it is ideal for live video applications.

“We have live coverage of news events quite often, because we always want to be the best,” Dewi continues. This has meant that sometimes Jakarta TV stations have asked Bali TV for coverage of news items that have national significance. “And when we have major events, like the Bali Arts Festival in July, we can be doing live coverage for as long as two hours,” Dewi adds.

She continues, “I think 2002 was the year of the ‘awakening’ of TV stations in all the regions of Indonesia, because so many began making efforts to preserve their local culture, just as we have been, here in Bali. Few TV stations based in Jakarta have bothered to present shows featuring the country’s regional culture, so we think this lack created a momentum towards regional TV stations endeavoring to cover local cultural events, as a way of promoting and preserving the culture.”

This followed the country’s new broadcasting law, which encouraged privately-owned provincial TV stations to start up. (TVRI, the government-owned TV and radio network, is relayed across many of the islands of Indonesia.)

Bali TV doesn’t yet cover anything in high definition. “Actually,” Dewi points out, “the government has ruled that all TV stations should be in Hi-Def by 2012, but frankly it’s a fantasy. It will be very difficult, as it would mean we will have to change almost all of our video equipment, and we are less than nine years old!

An INMARSAT Explorer 700 communication device in use “We will certainly wait until Jakarta TV stations have moved up to HD, because although the economy is quite robust, naturally we have suffered as a result of the global economic crisis. And since July 1, 2010, we have had a 10% increase in the cost of electricity, which, for a company like us, still has an impact,” Dewi said.

That money has always been tight is shown by the cameras the station uses, which are relatively old now – ‘industrial quality’ or ‘prosumer cameras’ from Panasonic. For instance, Dewi explains, “The NV-MD9000EN mini DV camcorder we are using is a shoulder-mounted camera which weighs only about 5-6lbs, has a 15x zoom lens, and records around 500 lines of video resolution. We also use Panasonic ’s MD10000 cameras with their 10x zoom lenses having optical image stabilization – while in the studio we have Sony cameras. Although they may not be very up to date, we are still using these cameras nowadays.”

So then, what challenges lie ahead for a relatively small TV station on a tropical island almost on the edge of the South Pacific?

Says Dewi thoughtfully, “We have to learn to be more creative – not only to produce more programs, but more attractive programs, because there are other TV stations coming up in Bali, in addition to the 11 free-to-air stations being relayed from Jakarta. So, with already a choice of 17 TV stations, we have to stay ahead of the competition.”

Also, in the near future Bali TV hopes to develop its website to make it more attractive.

“Overall, we are still optimistic that we can keep our viewers, as we were the first TV station here, and with our live coverage of events, so far at least, we have something that the other stations do not have.”