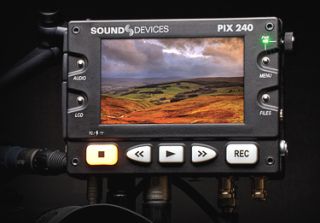 AMSTERDAM—Sound Devices is giving its first demonstration of its line of new audio/video recorder products to European at this week’s IBC Show. The new devices—the PIX 220 and PIX 240—bring video recording capability to the company’s long list of high-performance audio recorders. Both of the new units can be connected to television cameras via HDMI and can record directly to QuickTime with Apple’s ProRes or Avid’s DNxHD codecs. The PIX 240 allows the use of HD-SDI inputs and provides simultaneous SDI and HDMI outputs. The PIX 240 also includes a built-in Ambient Clockit timecode generator with a genlock output for multicamera and double system sound applications.

Both of the new A/V recorders include a five-inch LCD display for setup and monitoring functions.