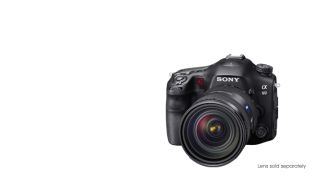 The camera was designed to be both more compact and substantially lighter than Sony’s previous full-format DSLR as well as most competitors’ full-format models as well.

In addition to the advanced full-format sensor, the α99 employs a range of advanced new features to get tack-sharp corner-to-corner resolution that is critical to enlargements. Three key new technologies in the camera include light concentration technology, photodiode expansion technology, and a multi-segment optical low-pass filter.

Sony’s new addition to the Alpha NEX compact system camera lineup is the NEX-6, which will hit the market in November. Improvements over the previous NEX models include a power zoom lens, which will be this camera’s standard; two dials for DSLR-like operability; and a built-in electronic viewfinder. The power zoom lens (16-50mm) is half the height of the previous standard NEX 18-50mm lens.

The camera’s APS-C image sensor offers 16.1-megapixel resolution, and the camera’s light sensitivity is boosted via the new Bionz image-processing engine with an ISO range to 25,600.

Meanwhile, Sony’s newest flagship Handycam is the NEX-VG900 ($3,300 suggested retail, body only), which will take the ability to have interchangeable lenses to the next level through the addition of the same 24.3-megapixel full-frame CMOS sensor used in the aforementioned α99 DSLR.

The camcorder is targeted at video enthusiasts, filmmakers and artists looking for more creative flexibility in their equipment.

The camcorder is billed as having “the first full-frame 35mm EXMOR sensor in a Handycam.”

The full-frame sensor covers 45 times the area of typical camcorders, and is considered a powerful tool for narrative video, wide angle shots and story-tellings.

Other features include a 24-megapixel RAW still photo capability, a 3-inch OLED touchpanel and an XGA OLED TruFinder electronic viewfinder.