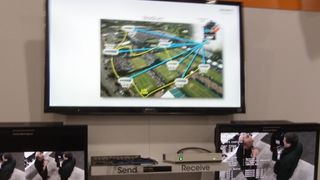 Using the Internet Protocol (IP) to move pre-recorded video signals around facilities and across the country has become almost commonplace, saving broadcasters, content distributors and venues that use video significant amounts of money in cabling costs and installation time in installation.

Sony is taking this idea a step further and saying it can offer a special signal processing box (the NXL-IP55) that converts live HD-SDI baseband signals coming directly from a camera into IP packets for delivery over affordable Cat-6 Ethernet cable. These packets are then compressed — using proprietary algorithms — before going on their way. Distance limitations can be overcome on site by piggybacking onto a fiber-optic camera cable.

“The implications for anyone that wants to send live signals cost-effectively are huge,’ said Hugo Gaggioni, Chief Technology Officer and Vice President, Sony Electronics, who introduced the idea at the Content & Communications World (CCW) show in New York City. “I see a day when a camera operator calls up a production truck and asks for a dedicated line to send their live images.”

Using the IEEE 15888 Position Time Protocol (PTP), the unit time stamps the video packets — creating a master clock that all cameras can genlock to, for lack of a better word, in order to ensure that they are in sync with other cameras as part of a multi-camera production. It’s critical that all camera feeds are properly synchronized.

“If you screw up the timing and don’t synchronize the cameras, you can’t accurately reconstruct the video at the receive end,” Gaggioni said. “That’s why time stamping the packets is so important.”

Sony says it can send four HD signals over a single Cat-6 cable without degrading the quality. The NXL-IP55 can be used in tandem with any L2 switch, but the key is that you must have a point-to-point connection for the transmission to happen accurately and without packet loss. Thus, you can’t send these signals over the public Internet, because then you lose control over where the signal is hopping.

Such a live IP video system could have significant benefits to production crews working at a venue that has already been wired with Cat-5/6. Sony’s technology was tested this year at a major tennis tournament, at which its robotic cameras were positioned at numerous courts to allow the broadcaster to look in on different courts by using a standard data switch.

Gaggioni said the technology would be available by the end of the year for around $20,000 (for a send and receive box). It will be used for next summer’s Brazil World Cup and “for sure” at the next Olympics.

“This is the future, as broadcasters and production companies look for more efficiency and ease of use in all of their production equipment,” Gaggioni said. “Why run a heavy coax cable when I can send the same amount of video, communication and control data over a tiny Ethernet cable?"