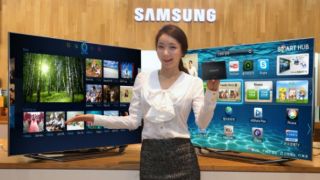 Every year at the Consumer Electronics Show (CES), attendees are introduced to the “next big thing.” The problem is last year’s technology becomes quickly outdated. This year Samsung, in an attempt to allow users of older technology to keep up, will introduce an "Evolution Kit" that enables users of Samsung 2012 Smart TVs to evolve into Samsung’s new 2013 Smart TVs. The Kit provides regular software updates as required that can be downloaded by the consumer in order to keep their TV up to date with the latest features.

In an era of software-centric devices — both in the consumer and professional arena — that can be easily upgraded with software, the idea is sure to be used by other manufacturers as well.

By attaching the Evolution Kit device into the back of a Samsung Smart TV, consumers get the latest features that the 2013 Smart TVs have to offer. With hardware enhancements, such as CPU, memory and GPU up to the level of the latest Smart TV, users get faster speeds for browsing the Internet and multitask by using apps while watching TV.

In addition, Smart Interaction features such as voice control and motion control will be enhanced. Once the Evolution Kit is attached to the slot, the 2012 Smart Hub is upgraded to the 2013 version. Every year, consumers will now be able to update to the latest services with Samsung’s Smart TVs.

“Evolution Kit has opened a new era of Smart TV and completed a true Smart TV with its innovative concept, which fits in the rapidly changing IT trends," said Sunny Lee, executive vice president of Visual Display Sales & Marketing Team, Samsung Electronics. “Consumers can enjoy the latest features and services every year without having to purchase a brand new set. Samsung Smart TV users will enjoy Timeless TV that transcends time with Evolution Kit.”