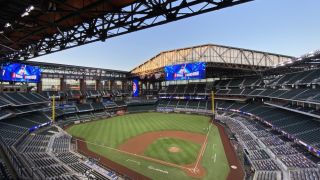 In his case, the stoppage meant postponing the debut of the park’s Daktronics HDR 1080p video displays, its control room and MLB’s first IP-based router; so the usual hustle to have a new system operational for an MLB park by Opening Day wasn’t as necessary, as 2020’s truncated 60-game season was held up until late July.

But today, DeRuyscher and his staff are getting the chance to enjoy their new toys. “We knew we wanted the next generation of technology in the new setup,” he said, “so we looked at 4K and 8K options before going with the HDR 1080p,” which operates at 60 fps.

The design of Globe Life Field and its retractable roof had much to do with the size and shape of the displays, as well as the somewhat unusual decision to include two main boards in a baseball park.

To work around the retractable roof, the Rangers built the giant 57x157-foot videoboard that hangs from the right field roof and installed a 39x110-foot videoboard in left. “I’m a big fan of two large boards in any stadium,” DeRuyscher said. “If there’s just one, one-third of the fans have to turn around to see it, if they can see it at all.”

The Rangers also added ribbon boards to the mix. The main install is 2x196 feet and spans from foul pole to foul pole, in foul territory; beneath it is a first in MLB: a digital LED 2x108-foot home plate board “where the user doesn’t have to rotate signage,” said DeRuyscher, who added that the brightness “is turned down to just 10 percent” during the action to avoid distracting the pitchers.

Also on hand is a similar ribbon board along the upper deck in right field and the one component that was moved in from the old ballpark, the 80x21-foot, left-field videoboard, which will serve as Globe Life Field’s centerfield out-of-town scoreboard.

The install encompasses an all-new control room—which was designed by WJHW and integrated by Diversified—with a Ross Acuity switcher and Xpressions CG; two EVS servers (one six channels in, two out, the other eight channels in, four out); Daktronics Show Control and Live Clips playback; Sony cameras, including four HDC-3100Ls (on tripods), two HDC-3500Ls, four FS5s and one FS7 with Canon UJ90X9B, P01-DSS and CJ24ex7.5BIRSES lenses; a Riedel Communications Bolero wireless intercom, Quantum storage servers and MAM services from CatDV.

But what’s most notable about the room is the Lawo IP routing system, which DeRuyscher said makes Globe Life Field “the first sports facility to use it for video routing, as opposed to just audio.

“It’s the future,” he said. “It’s versatile and enhances options for distributing video. The possibilities with it seem endless.”

The Rangers decided to use Daktronics’ Show Control system to tie together their LED ribbon and video boards and are the first to use their newly-unveiled Camino system. “It allows us to tie in various content by pushing one button; it’s seamless, tight and well-coordinated, so our staff doesn’t have to do countdowns and all push our respective buttons at once,” said DeRuyscher. “We’re very excited about our show going forward.”

That heightened ease of use has come in handy during COVID-19, especially with the normal crew of about 21 reduced to 13. But with this MLB season almost seeming like a tune-up for 2021, DeRuyscher is looking forward to having everyone working in sync next year.