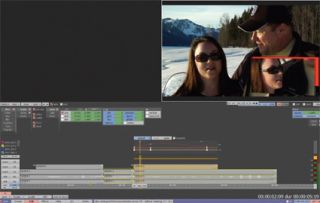 Quantel QTube
The Quantel-sponsored Formula 1 race car parked outside the South Hall of the Las Vegas Convention Center carried a message: According to Steve Owen, Quantel director of marketing, it was a preview of the company's state-of-the-art, high-performance products found inside the hall.

"You can edit and interact with content wherever you are," said Owen, calling QTube a "global workflow." Users of Quantel's Enterprise sQ system can access video assets using Quantel applications, Web browsers or even mobile devices, even with relatively small amounts of bandwidth.

A host of new versions, features and upgrades were also announced, including Pablo PA, a software-only version of its Pablo editor; a new set of Stereo 3D tools across Quantel's post and broadcast products; and Qube, a new short-turnaround editor for Enterprise sQ, which harnesses NVidia GPU's to run up to four times faster than prior tools. © 2011 NAB