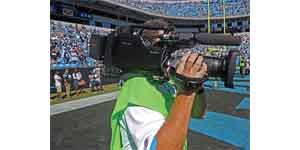 “We typically employ two cameras for sideline recording of live game action,” says Dickens. The Dionic 160s power both the Sony PDW-F800 XDCAMs cameras, as well as supplemental equipment to capture events in the stands. During the week, the batteries are utilized to capture interviews, as well as practices.

“On game days, the dependability really comes into play for the wireless camera operators working in the stands,” says Dickens. “We interact in all different areas of the stadium, so it’s important that our production crew members don’t have to worry about carrying a lot of spare batteries. And it’s really the same thing with the sideline crew—they don’t have to carry a lot of equipment while trying to keep up with the live action.”

Delivering up to 10 amps of power, the Dionic 160 is constructed of lithium-Ion cells and weighs 40 percent less than a NiCad or NiMH battery. However, it has 25 percent more capacity and will run a 30-watt camera for over six hours.

“Having the visual display on the side of the battery allows us to know, with just a glance, how much time is left,” Dickens says of the patented RealTime display, which shows up to nine hours of remaining run time.

The team also utilizes the four-position Quad 2702 PowerCharger, which can sequentially fast charge Anton/Bauer Logic Series batteries by through the InterActive system. “We can see the status of the battery instantly, but also know the chargers help extend the life of our batteries,” says Dickens.

Anton/Bauer also recently introduced its Dionic HD battery, which delivers 10 amps of power and is a 183Wh battery featuring Li-Ion cell technology. It incorporates the company’s latest software architecture and improved LCD, weighs the same as a Dionic 160 and powers cameras for the same length of time. The Dionic HD also includes enhanced RealTime display, which indicates both fuel gauge and remaining run-time data simultaneously, showing readouts of hours, minutes and remaining capacity. It incorporates a sleep mode setting that reduces battery self-discharge, and it can exit this mode through the built-in motion sensor.