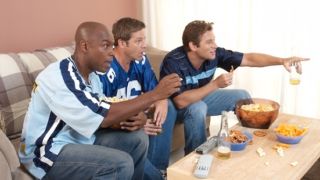 NEW YORK—A majority of professional sports have been suspended or cancelled for more than a month because of the coronavirus pandemic, but that’s not lessening the amount of time that avid sports fans are spending consuming TV.

A new Nielsen report details just how the heavy sports viewer has adjusted his viewing habits in the absence of daily and weekly live sports, which has increased since people have been encouraged to stay home.

While the growth in daily consumption time for the heavy sports viewer is not as significant as the average adult in the U.S. (10% for the sports fan compared to 23% for other adults between March 8 and March 29), the sports viewer still leads the pack in time spent consuming traditional television. But use of connected TVs and other devices have also increased. For instance, internet-connected devices that can stream content to the TV saw a 20 minute increase in usage a day by the heavy sports viewer, a 50% increase from March 8.

While viewership numbers among heavy sports viewers and regular viewers alike have gone up for local news and SVOD programs because of the virus, sports content still holds a particular interest in certain markets even without live sports. Sports viewers spend 12% of their time watching sports-related content in Boston, 11% in Washington, D.C., and Pittsburgh, and 10% in Detroit and New York City.

Meanwhile, some sports leagues have been able to increase interest in their content even during the pandemic. NASCAR created a virtual series of races with popular drivers, retired and current, that drew loyal and new fans—Nielsen reported that a virtual race on March 22 was the most watched linear esports broadcast in history.

The full Nielsen report is available on its website.