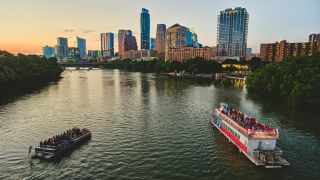 AUSTIN, Texas—Four television stations have ushered in NextGen TV to viewers in Austin with the rollout of ATSC 3.0 transmission, making them part of the initial wave of 3.0 stations projected to reach 75% of TV viewers across the U.S. by mid-2021.

“We are extremely pleased to be adding more markets to the growing list of areas where NextGen TV is available over the air,” said Brett Jenkins, Nexstar executive president and CTO.

“These consistent upgrades to the transmission technology of our stations enable Nexstar to serve its existing viewers with better products while also opening up greater optionality for the company to pursue a variety of new business opportunities,” he said.

OTA viewers of 1.0 service must do a channel rescan with their DTV sets to continue receiving the channels. Cable and satellite viewers will not be required to take any action.

PLUS: ATSC 3.0 Deployments: Where and When Will NextGen TV be Available?

“We are quite excited to bring the game-changing benefits of NextGen TV to our viewers in Austin, a city with a rich history of driving innovation and progress,” said Mark Aitken, senior vice president of Advanced Technology at Sinclair. “Going forward, residents in the area can look for a more enjoyable viewing experience, with future upgrades to the system offering a more personalized and immersive viewing experience.”

Calling NextGen TV “[t]he future of television,” TJ Vaughan, owner of KNVA, said today is “an important day for KNVA and the city of Austin.”