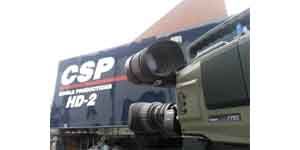 CSP outfitted HD2 with the HDK-77EC after putting 16 of the cameras onboard two other trucks. “We’ve been extremely happy with the performance and reliability of our Ikegami HDK-77EC’s, and it was the obvious decision to add them to HD2,” says Len Chase, president and co-owner of CSP Mobile Productions.

The HDK-77EC is a docking-style portable multi-format HD camera with CMOS imaging sensors for 1080i/720p HD format flexibility, lower power consumption and reduced operating temperature. The cameras also feature the ability to quickly switch between fiber or triax cables. “We’ve got NFL football, college football, the NBA and college basketball all happening at once,” Chase says. “This is our frantic time, but we know we can count on Ikegami cameras.”

Little Bay Broadcast Services integrated HD2 and also helped CSP to build its HD1 mobile unit. “As CSP Mobile has seen first-hand, Ikegami cameras are ideal in the field for sports, entertainment, and news,” says David Raynes, a Little Bay partner. “The HDK-77EC is robust and rugged, and Ikegami’s colorimetry has always been phenomenal.”

HD2 is rolling full speed ahead, and Ikegami HDK-77EC cameras are a consistent common thread with the rest of the CSP Mobile HD fleet. “Failure is not an option in mobile production,” Chase says. “We’ve been in the business since 1989, and we’ve only owned Ikegami.”