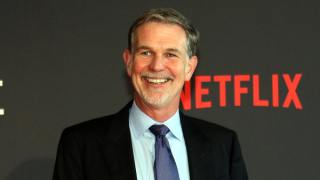 WHITE PLAINS, N.Y.—SMPTE is recognizing the impact that Netflix has had on the industry by giving an honorary membership to the streamer’s founder Reed Hastings. This is just one of the many announced recipients for SMPTE 2020’s Awards Gala, which will recognize this year’s recipients during the virtual SMPTE 2020 conference.

Hastings is being given SMPTE’s highest accolade “for his momentous development and continuing leadership of Netflix,” SMPTE said. Two other individuals are being recognized this year with honorary memberships: John D. Ross, recognizing his career’s work in advancing the state of the art in television engineering, and Richard Edlund, for his work in advancing the art and science of visual effects cinematography.

As the ATSC 3.0 standard is beginning to be rolled out across the U.S., SMPTE will recognize Dr. Richard Chernock with the David Sarnoff Medal. This award recognizes outstanding contributions to the development of new techniques or equipment that have improved the engineering phases of television technology. Chernock is being honored for his contributions to the development of ATSC 3.0.

The SMPTE Progress Model, which the association calls its most prestigious award and recognizes outstanding technical contributions to the motion picture, TV and motion-imaging industries, is being posthumously presented to Natalie Kalmus, the co-founder of the Technicolor Motion Picture Corporation, for her pioneering contribution to motion-picture color. Kalmus helped develop the Technicolor process and worked on more than 400 films, including “The Wizard of Oz.”

“One of the many lessons we’ve learned over the past few months is just how much we rely on the media and entertainment industry to engage, inform, educate and entertain us,” said Barbara Lange, executive director at SMPTE. “The industry luminaries and next-generation leaders we recognize during SMPTE 2020 have all played an important part in shaping this industry and enabling its future evolution and success.”

Here is a rundown of the other honorees for the SMPTE 2020 Awards Gala:

In addition to the above mentioned awards, 18 new SMPTE Fellows will be recognized during the Awards Gala. The full list is available at 2020.smpte.org/home/fellows.

The SMPTE 2020 Awards Gala is scheduled for Nov. 11 and 12 during the SMPTE 2020 remote conference. For more information visit SMPTE 2020’s website.