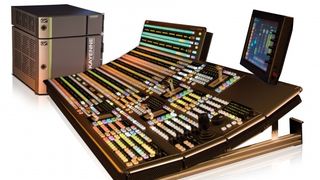 As it has done for the past 15+ years, veteran mobile production company NEP Broadcasting, based in Pittsburgh, PA, successfully brought to viewers the live broadcast of this year’s 64th Primetime Emmy Awards (Sunday, Sept. 23) on ABC. NEP Broadcasting’s expanding fleet of trucks feature a variety of Grass Valley Video Production Center switchers, some of which were onsite and used extensively by ABC and E! Networks to facilitate the HD coverage of the red carpet ceremonies.

With multiformat capabilities that allow users to get the most for their investment, NEP's Grass Valley switchers were used in the 720p HD mode, but can easily be reconfigured for all types of 1080 interlaced and progressive HD productions as well.

Onsite in Hollywood, NEP Broadcasting’s Sweetwater Cobalt truck featured a Kayenne switcher, while its Silver and Summit production trucks both featured a Kalypso switchers and Trinix NXT routing switchers. Collectively, the trucks handled all of the red carpet festivities for ABC and E! Networks prior to the main broadcast.

This year’s Emmys telecast on ABC attracted an average of 13.3 million viewers, according to Nielsen data, which was six percent larger than the 12.4 million, who tuned in a year ago.