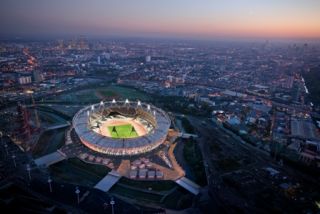 NEW YORK –NBCUniversal will provide 5,535 hours of coverage for the 2012 London Olympics across NBC, NBC Sports Network, MSNBC, CNBC, Bravo, Telemundo, NBCOlympics.com, two specialty channels, and the first-ever 3D platform. The amount of programming surpasses that of the network’s coverage of the 2008 Beijing Olympics by nearly 2,000 hours. NBC will broadcast 272.5 hours of coverage, the most ever for an Olympic broadcast network, largely attributable to an increase in daytime coverage.

“We are only able to provide this level of coverage to U.S. viewers because of the unmatched array of NBCUniversal assets,” said Mark Lazarus, Chairman, NBC Sports Group. “Whether on television or online, on broadcast or cable, in English or in Spanish, NBCUniversal has the London Olympics covered, providing the American viewer with more choices than ever to watch the Games.”

The London games mark NBC’s 13th Olympics Games and seventh consecutive, the most by any American network. The networks of NBCU will provide coverage of all 32 sports and all 302 medal competitions.

The NBC Sports Network will serve as the home to U.S. team sports, with 292.5 hours of total coverage from 2012 London Olympics this summer, including 257.5 hours of original programming – an average of more than 14 hours per day – the most-ever for an Olympic cable network. MSNBC will carry 155.5 hours of a wide variety of long-form Olympic programming over 19 days. CNBC will serve as the home of Olympic boxing, including the debut of women’s boxing. The channel will televise 73 hours of boxing coverage over 16 days -- from elimination bouts to the men’s and women’s finals. Bravo will act as the home of Olympic tennis this summer, televising 56 hours of long-form tennis coverage from July 28-August 3.

NBCUniversal will provide the most extensive Spanish language coverage in its history, offering more than 173 hours of programming on its Telemundo network.

Specialty channels for basketball and soccer will be available to cable, satellite and telco providers, and will total 770 hours of coverage.

Two apps – one focused on live streaming, one on short-form highlights, schedules, results, columns, and more – will be available for mobile and tablet users. The vast majority of content will only be available to authenticated cable, satellite or telco customers.

Panasonic Corporation of North America and the NBC Sports Group announced in January that they will partner to make the London 2012 Olympic Games available in 3D to all U.S. distributors who carry Olympic coverage on cable, satellite and telco -- nearly 100 percent of the multichannel industry. The effort will produce 242 hours of coverage and mark the first time that the Olympic Games will be distributed in the U.S. in 3D.

NBC’s coverage will begin with the Opening Ceremony at 7:30 p.m. ET/PT on Friday, July 27.