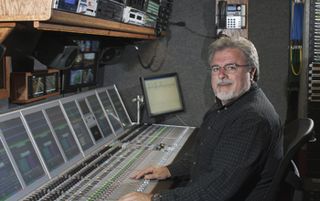 “This truck is a major departure from anything we’ve done in the past, especially for audio,” said Bill Duncan, director of engineering, MIRA Mobile. “We wanted to utilize some of the new technology that’s becoming more prevalent. Virtually every major piece of gear is a new model or a new manufacturer for us.”

DISTRIBUTED ROUTING MODEL
Take signal routing, for example. Instead of a hierarchical model, where signals enter a plant router, and then feed other subsystems, like the audio console, M12HD employs a more distributed model. The two main audio routing components are a Calrec Artemis Beam audio mixing system with Bluefin2 DSP and Hydra2 networked router, as well as Evertz EQX video and EMR audio routers.

“There’s going to be a need for multiple audio signals for each video channel, and this has pushed us in the direction of embedded audio,” Duncan said. On the Evertz EQX HD video router, one type of card handles 16 channels of video, each with 16 channels of embedded audio. That’s 256 audio channels per card, which is time division multiplexed on one video cable, and feeds the Evertz EMR audio router, which automatically extracts the signals. (M12HD actually uses redundant cables for each feed.)

M12HD uses four of these cards for over 1,000 crosspoints for just this portion of the routing system. The embedded audio cards are part of the Evertz 334x462 HD video router. The audio portion consists of a 96x96 AES router, and a 48x96 analog stereo router.

In addition to embedded audio, the other big shift in design philosophy was using the audio routing capabilities of the Calrec Hydra2 networked routing platform as a primary router. “The basic glue of the audio system is the console itself,” Duncan said. “Now the Calrec audio console, with its many crosspoints in its internal routing system, takes a lead role in the truck and feeds signals directly. It’s not looked at as a subset of video. Now audio takes its rightful place.”

The Calrec Hydra2 network is a true network, according to Henry Goodman, head of sales and marketing at Calrec Audio of Calrec. It connects the console, I/O boxes, and other Hydra2 networks.

“There’s no DSP in the router,” Goodman said. “It acts like a hub. You can plug in as many I/O boxes, either fiber or copper, as you need. When you plug in an I/O box, it’s plug and play, as long as you set the system up right. You can plug in from different places, and you don’t have to have all the boxes plugged into the system at the same time.”

I/O boxes come in different flavors including analog audio, AES, SDI embedded, and MADI. A single connection between routers can support 512 channels in both directions, for 1,024 in total, and at high bandwidth, Goodman said.

The console router can be used as well for audio signals not destined for the console system. “We use about 2,000 crosspoints to get signals into and out of the console,” Goodman said. “That leaves about 6,000 available to route signals that bypass the console.”

Determining what signals to connect to each routing system took some figuring. “You just take pencil to paper and see what makes sense,” Duncan said. “Not every source in the video router needs the embedded audio capability.”

Feeds to the replay or tape room needed to be embedded, as well as external feeds to the truck. “But it doesn’t make sense for cameras or the multiviewers,” Duncan said. The MADI stream comes into the audio console. The microphone feeds come into the console as analog, typically from 12- pair cable. Aside from the mic feeds, “there is little need for analog now,” Duncan said. “Everything else is either AES or MADI.”

Sending feeds to and from the audio console router directly gives the A1 (audio mixer) more control, Duncan said. Where in the past, external feeds may have been set up manually by an EIC or the A1, now the A1 can directly create feeds to such destinations such as production monitors and IFBs (mix-minus). In addition, these and all the settings for the console system can be saved on a flash drive and recalled for later productions.

Physically the M12HD audio control room in the 53-foot expanding truck is in the middle of the trailer between production and tape. This “is a continuation of a design that is very popular with our clients and that originated with our M7HD,” Duncan said. This design allows a continuous walk-through of all production areas of the truck without having to go outside.

Gerling & Associates build the truck, and Barry Bennett at Bennett Systems was the systems integrator.

Duncan feels that the exponential increase in audio signal capacity will open up new opportunities for MIRA Mobile. Yet, “we don’t think we will ever surpass the capability,” he said.

Even with all the latest technology, the truck was designed to provide the familiar and comfortable look and feel of its other trucks. “Our clients feel at home,” Duncan said.

M12HD has been on the road since the end of May, but its real purpose in life starts this month with the debut of the Pac-12 Networks when M12HD is slated to cover the premiere Pac-12 college sporting events.