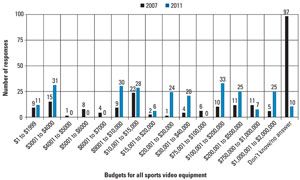 In June of this year, D.I.S. Consulting released a comprehensive market study titled “Sports Video World 2012.” The study represents a complete analysis of the market for sports television equipment. Sports have always held a uniquely important position in television, and the growth in sports revenue over the years has been nothing short of phenomenal. Sports today represent a mega-multi-billion-dollar total market that just seems to keep growing exponentially.

Sports — then and now

I grew up in a working-class neighborhood in Philadelphia, in the halcyon pre-cable and pre-satellite days. I recall seeing banners splayed with the words “Watch New York Games Here” or “Yankees TV Here” hanging over the doorways of local street-corner taverns. Atop the roofs of those taverns were huge TV antennas mounted as high as possible to capture a few microvolts of snowy signal from New York television stations some 90mi distant. Those precious signals were then transported via the most basic of transmission lines — 300Ω twin lead — to a set of screw terminals on the back of a 21in television receiver. Those 21in sets, representing the largest screen size then available, were usually mounted at squint distance: up high and at the end of a long bar. Sports of old, in microcosm — even then, in its own way, creating revenue and driving investment.

Figure 1. One of the charts from D.I.S. Consulting’s “Sports Video World 2012” study demonstrates the dynamic level of growth in budgets for sports video equipment between 2007 and 2011.

I spoke with Doug Sheer, the CEO and chief analyst of D.I.S. Consulting about the study. “The sports video equipment market is experiencing dynamic growth,” he said, and then called sports video spending “amongst the most attractive in the entire professional equipment marketplace” and described it as occupying a “consistently stable place among many much less predictable ones. Figure 1 shows one of the charts excerpted from the D.I.S. study, demonstrating that dynamic level of growth in just the 2007-2011 time frame that Sheer was alluding to.

Despite encroachments by sports cable channels, the televising of sporting events remains a major revenue generator for local broadcasters. The “big three” in local ad revenue are news, political spending and sports. News revenue is king, not to be dethroned any time soon. Political spending adds greatly to local ad revenue, but is cyclical in nature as a function of election years and is not always dependable as campaigns move spending around to where it is needed.

Sports ad revenue, although varying through the year as a function of the popularity of the major sports, is there consistently. And, local pre-game and post-game shows provide yet another source for sports ad revenue.

As the political spending cycle is coming to a rapid close, local broadcasters might want to take a fresh look at revenue sources and ensure they are maximizing their sports revenue opportunities. Equipment suppliers can maximize their own sales by joining with broadcasters in that look.

—Anthony R. Gargano is a consultant and former industry executive.