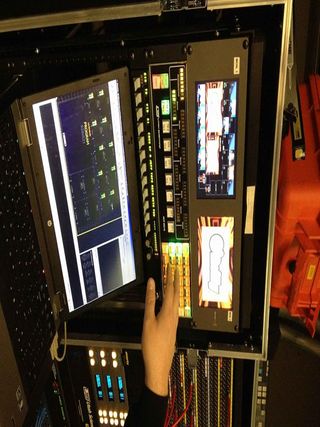 The units work together as the nerve center of the mobile production setup, which produces multi-camera specials for the station and its client lineup, including the Indiana University Department of Athletics and its video board shows inside the University's football stadium, basketball arena, and swimming and diving venue.

“When we added a replay system to our remote unit, we needed to add a router to speed up the connections between sources such as cameras and server I/O,” said George Hopstetter, WTIU director of operations and engineering. “Hard-patching the equipment and using the aux bus on the production switcher just wouldn't work anymore. It just made sense to add a router rather than trying to find patch points every time we set up.”

The UTAH-100/UDS system replaced the patching function for the mobile production unit, saving time and effort during setup, and ensuring the flexibility to make changes or bypass problem areas during production. Additionally, having a router makes it easier to meet routing requirements when hiring out the equipment or working with the Big Ten Network, ESPN and other broadcasters.

“Figuring out where to patch to and from with a patch cord in hand is cumbersome and time-consuming, and once it's set up at the event, that's pretty much how it stays,” Hopstetter said. “But now we can reroute on the fly, which is essential in a fast-paced sports environment.”

WTIU relies on two 64x64 UTAH-100/UDS units — one to handle HD video signals and one to handle audio signals — as well as an SC-400 control system and five control panels.

The UTAH-100/UDS units meet WTIU's need for a high density of inputs and outputs in a small footprint, and the system can also serve as a backup for the production switcher.

The modular UTAH-100/UDS system is based on I/O modules with 16 ports, interconnected by a crosspoint fabric that allows any input signal to feed any number of output ports.