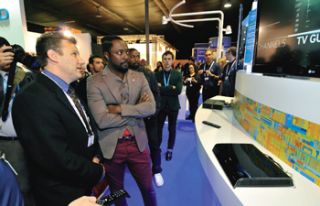 AMSTERDAM— As the broadcast industry attempts to clarify its role in the new digital media landscape, manufacturers in the meantime are continuing to consolidate. Both are working harder than ever to remain relevant in a rapidly evolving transition in both big screens and small.

These were among the trends at IBC, the broadcast industry’s second largest trade show last month. Broadcasters searched for new ideas to maintain their role as the primary source of video entertainment and information, even as a new generation of media consumers rejects the status quo. People now expect multiscreen, ubiquitous video and data to be available on any device, at all times, for sharing and interacting with on social media platforms.

SURVEY SAYS
Indeed, multiscreen delivery was time and time again confirmed as the number one issue among broadcasters at the show, which logged a record nearly 51,000 visitors by show’s end. At a press conference, Avid revealed the results of a media industry survey conducted by U.K. research firm Ovum, which left little doubt as to what was uppermost in broadcasters’ minds. Approximately 85 percent of respondents cited multiplatform distribution as “critical” to future growth and 78 percent predict that content will be customized based on individual user profiles. “The key message from this survey is that the audience is taking control,” said Adrian Drury of Ovum.

After delivering the keynote at IBC, musical artist and techno pundit will.i.am toured the exhibit floor. Meanwhile, media companies seeking to monetize their assets believe that one-third of their media is inaccessible to consumers, and currently 75 percent are exploring future cloud deployments. But the survey also revealed an industry that is upbeat about its future; 60 percent said the broadcast industry will strengthen over the next five years, with U.S. respondents slightly more bullish.

3D AND 4K
Open-based media platforms, social networking, 4K resolution, cloud-based production and distribution and even the often-dissed 3D format were topics of conversations in the exhibit halls and conference forums. James Cameron and Vince Pace returned to the show to promote new 3D production options, including a 5D production scheme that allows 2D and 3D footage from a single shoot. The two also provided the first public showing of 3D footage of Cameron’s record- setting deep sea dive in the Marianas Trench, in the form of a trailer for an upcoming 3D film “James Cameron’s Deepsea Challenge 3D.”

In the 4K arena, Sony continued to promote its F65 4K camera, including a demo that merges footage from two 4K F65 cameras to create zoomable panoramic with HD output. Canon showcased its new EOS C500 and the EOS-1D C 4K DSLR cameras, with an expanded range of 4K-resolution EF Cinema Lenses also on display. Japan broadcaster NHK, which has wowed IBC audiences for years with its Super Hi-Vision 8K demos, showed an 8K camera capable of capturing images at 120Hz to provide highly enhanced motion.

INDUSTRY M&A
A major industry merger that happened right after NAB as well as another anticipated major industry sale were in the spotlight at the show. Harris Morris, the president of Harris Broadcast, which is now on the block, said that the sales process is “moving forward as scheduled” and expressed “confidence” that it would be completed by year’s end. The company also announced its new Versio Channel-in-a-Box as well as its Invenio Asset Management platform.

Belden provided more details about its recent acquisition of Miranda Technologies. Denis Suggs, Belden executive vice president, touted the company’s rapid expansion, characterized by its recent acquisitions of Telecast and now, Miranda. “This is a strategic move for Belden,” he said, “Belden is not just a wire company. We’ve been transforming ourselves since 2006,” adding that the company’s commitment to the industry is “not short term.” He announced that while the Miranda name would continue, the Telecast brand would be integrated into the Miranda brand.

Several other mergers and acquisitions were announced at the show, including the merger of two Norwegian-based video networking and transport companies, TVIPS and Nevion. The combined company will be called Nevion, with approximately 200 employees. Nevion’s current CEO, Geir Bryn-Jensen, will be CEO of the combined company. TSL Professional Products Ltd., a U.K.-based provider of audio monitoring technology announced that it had acquired fellow U.K. company Soundfield Ltd., a provider of surround sound microphone and audio processing technology.

NEW MOVES
Snell indicated its distaste for 1080i as well as its desire for a progressive world by announcing that it would offer 1080p support in all of its product lines at no charge. Grass Valley announced a slew of product enhancements, including the new LDX Series of camera systems. The product line, initially consisting of the LDX Première, LDX Elite, and LDX WorldCam offer full compatibility with Grass Valley’s line of 3G Transmission solutions and is based Grass Valley’s Xensium-FT third generation CMOS imagers. Company President Alain Andreoli announced that by the middle of 2014, its entire product line would be new and that all of the new products will “target the mid range market,” with options to upgrade.