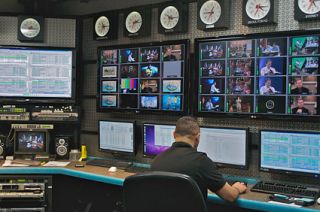 MELBOURNE, FLA.—The Harris Broadcast division will retain the Harris name for another three years while it transitions to a new brand, division chief Harris Morris said this week. Harris Corp. announced Thursday it was selling the broadcast business to The Gores Group LLC, a Los Angeles-based equity investment firm, for $225 million.

For the time being, it will be business as usual, Morris said. No immediate cuts are planned for the workforce of 1,700, and the executive suite will remain intact, he said. Morris will continue to lead the company from its headquarters in Englewood, Colo. The facilities in Quincy, Ill., Mason, Ohio and others will be retained, he said. Harris Broadcast has 15 U.S. locations and 29 in Canada, Mexico and abroad, where the company started focusing resources following the domestic DTV transition.

Morris said no products or product lines are being targeted for discontinuation. News, mobile, multichannel playout, multiformat encoding—all are part of the division’s foundation. The latest Versio release—introduced at IBC—is on track to ship this month, he said. A major product announcement in the workflow, infrastructure and networking space, or WIN, is in the works for the pre-NAB presser.

Harris Corp., a major defense contractor with a $5.5 billion in revenues and 15,000 employees, announced the sale of the broadcast division last May, because, as Morris noted, “we didn’t quite strategically fit anymore.”

The $225 million sale price raised some eyebrows, particularly following the $450 million acquisition of Leitch in 2005, and the $340 million Encoda purchase the year before. As far back as 1999, Harris paid $85 million for Louth Automation.

The broadcast business reported an operating loss of $30.8 million on revenues of $486 million for fiscal 2010, a 17 percent decline in revenues from the previous year due in part to “significantly lower results in the transmission systems business,” according to Harris’s 2010 annual report. The period coincided with the end of the U.S. digital television transition, during which hundreds of TV stations replaced their transmission facilities.

Broadcast results were combined with other businesses in 2011, and broken out as a $447.6 million write-down for fiscal 2012. Harris said the write-down resulted in part from an “unanticipated revenue decline and operating loss” for fiscal 3Q12 as a result of weaker demand in North America and longer lead times for international sales.

The Gores deal comprises $160 million in cash at closing, a $15 million subordinated promissory note and an earn-out of up to $50 million based on future performance. The transaction is expected to close early next year. The Gores portfolio ranges from textiles to technology, with brands such as Siemens Enterprise Communications, Scovill Fasteners, Alliance Entertainment, a CD/DVD distributor, Equinox payment terminals and others, but no broadcast equipment manufacturers. Instead, Morris said, Gores brings capital resources as well operational expertise, e.g., managing a global supply chain, to the table.