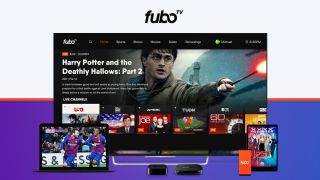 NEW YORK—fuboTV, a vMVPD streaming service, has reported significant growth in both its number of subscribers and its total revenue from the first quarter of 2020, which ended on March 31.

Financial filings shared by FaceBank Group Inc., which merged with fuboTV in April of this year, show that the streaming service’s revenue for Q1 was $51 million, a 78% increase from Q1 2019. The company cites growth in subscriptions, subscription Average Revenue Per User (ARPU) and advertising sales as key contributors to the increase. Specifically, the number of paid subscribers at the end of Q1 was 287,316, an increase of 37% year-over-year, while the ARPU per month was $54.16, an increase of 25% year-over-year.

Other key statistics from the filing detail that the total streaming hours by fuboTV users (paid and free trial) in the first quarter increased 120% to 107.2 million hours. Monthly active users watched 120 hours per month on average in the quarter, an increase of 52% from 2019. Additionally, fuboTV says that early findings from Q2 2020, while most people have sheltered at home due to COVID-19, shows viewing hours have peaked at 8.5 hours per day and 145 hours per month.

Other financial news from fuboTV includes the strengthening of the company’s balance sheet with an additional $46 million in equity funding from institutional and private investors since the merger with FaceBank, including $20 million from Credit Suisse Capital.

fuboTV also recently signed a deal with the Walt Disney Company to add ESPN and other Disney-owned content to its programming.

“We believe fuboTV is at the forefront of the streaming revolution and has a significant advantage not only over peers in the vMVPD space but also over traditional cable television,” said David Gandler, fuboTV CEO, in a letter to shareholders. “We believe consumers will continue to choose streaming over traditional pay television because of this more personalized, premium viewing experience that is also less expensive.”