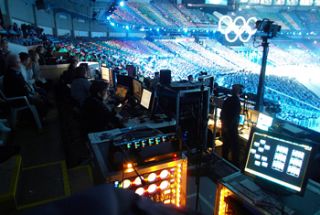 Clear-com V-series panels at the 2010 Winter Olympics
Clear-Com Communication Systems, a division of Vitec Group announced that its Hybrid Network was chosen as the intercom system for the opening and closing ceremonies and other events of the Vancouver 2010 Olympic Winter Games.

The P.A. People, an Australian-based AV supplier and integrator managing the ceremonies’ entire communications setup, selected the Hybrid Network (Hybrid Time-Division Multiplexing [TDM] Matrix/IP Server Intercom Network), which was deployed at BC Place, the primary venue for the Vancouver 2010 Olympic Games Ceremonies, the arena next to B.C. Place where the athletes were staged and queued, the IBC (International Broadcast Center) located a few miles away, and the Whistler Celebration plaza venue.

Powering the solution was the Eclipse Omega digital matrix intercom system with 192 panel and 4-wire ports, and two IVC-32 high-density IP connection cards providing an additional 64 channels of high-quality IP connections. A total of 80 V-Series matrix intercom panels, both standard and IP-enabled in both 12- and 24-lever varieties, were deployed for directors, producers, show callers, stage managers and other key users. Eighty party-line beltpacks were connected to the Hybrid Network for use at key positions at the venue. Finally, Clear-Com’s Concert intercom software system, accessible on a PC with Internet connection, was deployed at remote locations to provide additional intercom access points and communication backup.

“We are absolutely thrilled that our Hybrid Network is playing such an active, integral role during the production of the 2010 Winter Olympics,” says Matt Danilowicz, Managing Director, Clear-Com Communication Systems. “The P.A. People’s choice of this system is a testament not only to the confidence it places in Clear-Com systems to support the communication demands of large size, live events, but also a visible demonstration of the necessity for a forward-thinking, highly flexible intercom product such as the Hybrid Network in the marketplace.”