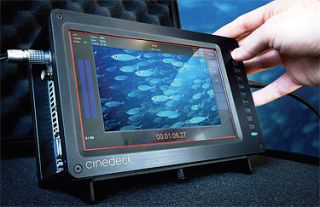 The CineDeck Extremely Capable Direct to Disk recorder
Even though change sometimes seems to be happening at light speed, it seems pretty clear that we live in evolutionary, rather than revolutionary times in our work as media producers. Not long ago, digital disk recorders were the province of the extreme high end, heavy, expensive, and complex to operate, often requiring a dedicated technician. The last couple of years have seen the introduction of numerous devices at varied places along the quality/price curve; the introduction of each seems to have inspired the development of the next.

The recent unveiling of the Cinedeck Extremely Capable Direct to Disk Recorder sets a new standard for what's possible with a portable direct to disk recorder, in terms of features, functionality, design, and price. The Cinedeck/Extreme—first of three planned models with the same physical shape, but different recording capabilities—uses, the platform-agnostic and visually lossless Cineform Digital Intermediate codec. Cineform produces a very high end codec and workflow system, with quality levels on par with, and some say surpassing, HDCAM SR. The Extreme model, under review here, records up to 2K resolution at 12-bit 4:4:4 or 10-bit 4:2:2 quality, in .MOV or .AVI format.

The Cinedeck is a 5x8x3-inch box—a compact computer actually—with a high-resolution (1024x600) LCD touch screen on the front. Sharing the front panel is a vertical row of buttons for changing modes. I/O, hard drive (SSD) and power connections are on the left and right sides, and there's a built-in Anton Bauer Gold Mount or V-mount battery mount on the back. Top and bottom 1/4-inch and 3/8-inch threaded holes provide several mounting options. The unit weighs about four pounds without batteries, consumes an estimated 50-65 Watt-hours while recording (depending on data rate and encoding type) and roughly 35 Watt-hours while idle, and will run on 9 to 25 Volt power from either a battery or the included wall adapter. The unit ships with a dock to permit the drive to be mounted onto a host computer for transfer and editing.

I/O includes HDMI, HDSDI/SDI, LAN and analog sources and destinations at SD, and HD frame sizes and a wide variety of frame rates, as well as a headphone jack for monitoring audio. There are external computer and NTSC/PAL monitor ports, along with an eSATA port (with port multiplier) and RAID support, two USB ports, and a tethered remote port. Also included is onboard and real-time up and down conversion, de-interlacing, 3:2 pulldown removal and 23.98 to 60i conversion on playout.

The touch-based user interface controls everything about the unit, and is one of the smoothest touch interfaces I've ever used. Cinedeck is a Windows based unit, with boot-up requiring about 40 seconds from the moment the power button is pressed. When the boot-up process is complete, the user is presented with a bright LCD screen showing the selected input. Unit info and status are displayed along the top of the screen. This information includes operating temperature, clip name, frame size, rate, and codec choice, and media space available. Soft buttons along the right side offer choices of aspect ratio and grid overlays (with more functionality and features to be added by the time you read this), including image analysis tools such as waveform, histogram, spectrum analyzer, zebra display and edge detection focus tools. Audio meters are provided on the left side, and timecode is prominently displayed at the bottom.

The lower right corner has a soft button that takes you to the setup screen. This is where one sets input and output choices. Parameters include resolution (NTSC/PAL SD to 2K), frame rate, format (YUV 8-bit, YUV 10-bit, RGB 10-bit), video I/O, audio source, codec (currently Cineform variable and fixed-rate and DNxHD, but optionally expandable). There's also a choice of Cineform quality level (low, medium, high, two levels of film scan, and lossless), and one can also name files with a touchscreen keyboard, set timecode parameters, and overlay and output display options. A soft button in the lower left corner changes the unit into playback mode, with a similar button in the upper right engaging record mode. (This turns on a bright red tally light on the Cinedeck, and frames the monitor image in red.) In my use, these buttons required a light touch to activate, and were just sensitive enough so the touch need not be hard enough to shake the unit and presumably the camera to which it is attached.

I shot two jazz concerts with the Cinedeck, attached to the top hot shoe of my Sony EX3, with the camera on sticks on a small dolly, and with the camera operating on battery power and the Cinedeck running on AC. With a few pumping iron sessions, I could have worked the show with the camera handheld, but the package felt a bit too heavy for my comfort level.

Operating Cinedeck is a real pleasure. With it mounted on top of my rig, I could easily use it for critical focus while shooting, and for file-based review during breaks in the action.

One thing that caught me by surprise while shooting in a live performance situation (although it shouldn't have), was the fan sound. Cinedeck is a compact (and densely packed) computer, which needs cooling during normal operation. Fortunately, there's a software panel to control both fan speed and the alarm that results when the unit gets too warm. I'm told that unit now shipping has a revised cooling system to cut noise considerably. As the LCD screen provides a wide angle of clear and accurate viewing, and the unit is so simple to operate, the Cinedeck is a joy to use, even in the "live" situation of shooting an event. The recorded files were noticeably sharper and cleaner than the files recorded to my camera's media cards.

Bringing the Cinedeck into the studio for editing is an equally straightforward experience. In order to use the files recorded on the unit, I simply downloaded the free Cineform NeoPlayer and installed it in my edit system. I pulled the solid-state drive out of the Cinedeck and plugged it into the included dock, connected that to my edit system via eSATA, and transferred files at quite a respectable speed. From that point on, my main Media 100 system and secondary Final Cut Pro system loaded the recorded Cineform files easily. However, if I wanted to output or archive my edits in that codec, I would need to purchase the full workflow/codec package at my chosen resolution from Cineform directly.

Cinedeck is a big league disk recorder at relatively minor league prices, and is the next phase in "smaller, faster, cheaper" direct- to-disk recorders. The functionality and feature set would be enough to make this unit attractive to post-production teams. The incredibly smart and user-friendly design makes a strong case for substantial return on investment over a short time period.