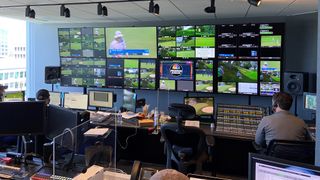 NEW YORK—CBS Sports has had to rely on new production techniques to bring PGA Tour golf tournaments to fans during the pandemic. One new technique is the use of at-home/REMI production technology from The Switch for live telecasts.

Supported by The Switch through its Burbank, Calif.-based control rooms and on-site low-latency connectivity, CBS Sports Productions has been able to produce a number of at-home/REMI telecasts in recent weeks that aired on the Golf Channel, including coverage of the recent PGA Championship.

For these broadcasts, 24 cameras and a multitude of audio sources were transported from each golf course to the Burbank control rooms. These sources were available to the CBS crew in Stamford, Conn., for them to produce and direct the telecast, replays and editorial off multiviewers. The Switch’s Burbank location also served as the originator for broadcast features like Top Tracer, Hawk-Eye and Video Shading.

This setup connects teams from around the U.S. This includes the site of the tournament where CBS host Jim Nantz broadcasts, as well as Orlando, Fla., where other CBS golf analysts call the tournament from. It also helps connect additional places needed for CBS Sports’ production, including New Zealand.

Of course, the need for remote production arose because of the COVID-19 pandemic to help keep production crews safe. The Switch maintains that “safety-first” practice at its Burbank facility, with technical and production crews handling the broadcasts remotely in Burbank, which reduced the number of personnel required on the course for each tournament.

“Certainly none of us anticipated the COVID outbreak and the impact to live sports, but the collective engineering, operations and production teams have done a remarkable job to bring back broadcast quality, live PGA Tour golf to an enthusiastic public audience in this new environment,” said Eric Cooney, president and CEO of The Switch. “While many of the COVID-related complexities will diminish as the pandemic is brought under control, our industry has significantly accelerated its comfort level and adoption of remote production solutions. We look forward to pushing the creative envelope with our broadcast partners in the rapid evolution of live sports production.”