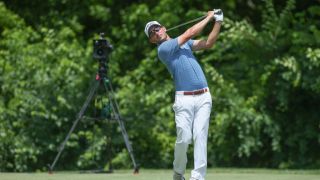 FORT WORTH, Texas—“This is the most complicated production plan I’ve ever been involved in,” said Sean McManus, chairman of CBS Sports, during a conference call on the network’s return to live PGA Tour coverage with the Charles Schwab Challenge from June 11-14 at the Colonial Country Club in Fort Worth,Texas.

What’s on hand for the CBS Sports crew is a full-fledged PGA Tour event with a reduced crew on the course, more mobile trucks, multiple remote locations and a couple of new features to try and add to the broadcast in the absence of live fans, resulting in “a golf production unlike any other” that took two months of planning, per McManus. But that’s what is called for as sports leagues and broadcasters return from months-long hiatuses because of the coronavirus pandemic.

CBS is working with NBCUniversal’s Golf Channel on the broadcast, with the same production and announcing team handling all four days of the tournament. This will allow for half of the normal amount of people to be on-site than is typical for a PGA tour production. Despite the reduced number of crew people, there will actually be more mobile production trucks at the course so that proper social distancing practices can be maintained, with about nine people working in a single truck.

In addition to the coverage that CBS will be providing, the PGA Tour has announced that it will be collaborating with Twitter by using its PGA Tour Live feed to create a “Twitter Multicast” on Thursday, June 11, from 1-2:30 p.m. ET. There will be nine video streams of Featured Groups coverage with athletes, celebrities and other personalities providing commentary. The guest commentators will include Charles Davis, Annika Sorenstam, Darius Rucker and Dude Perfect. For more information, visit pgatour.com.

There is an additional wrinkle when it comes to the production crews during these first few weeks. The crew that is working this tournament will also work next week’s RBC Heritage in Hilton Head, S.C. After that, an entirely new crew will take over the production for the next two events on the schedule. In addition, backup crew members are available in the event that anyone on the crew does become ill.

Among the on-site team will be commentator Jim Nantz, who will call the action of the tournament alone in the broadcast tower on the 18th hole—a change of pace from the typical five to six usually in the booth, according to McManus. There will also be only two on-course reporters—Dottie Pepper and Mark Immelman. The rest of the broadcasting team will be working remotely in various locations, including Nantz’s partner Nick Faldo from the Golf Channel Studios in Orlando, Fla.

Other production elements for the broadcast, like scoring graphics, remote editing, video shading, multiple replay devices and more, will be done from additional remote locations that include Los Angeles, New York, Samford, Conn., and New Zealand.

Some production elements have not been drastically changed, McManus said. The production will feature 23 cameras, including 10 hard cameras, six mini RF cameras, as well as robotic cameras. Other recognizable features for a CBS golf broadcast will still be present, including the 3D Toptracer for following live tee shots and Toptracer RF for players’ second shots; ARL Virtual Eye meanwhile uses Toptracer ball tracing capabilities to use with 3D hole models. CBS’ SwingVision technology will also be available.

EXPANDING USE OF HAWKEYE

However, there are some new additions to the production. ARL Virtual Signage is augmented reality technology that can virtually place statistics, player information and sponsorship partnerships on the course with full trackable camera moves. The Hawkeye Replay Source, meanwhile, sees an operator control camera angles remotely for real-time replays. Hawkeye has been a feature on CBS digital platforms in the past, but will now be integrated into the linear broadcast for the first time.

In addition, CBS is pushing to have more players mic’d up during their rounds so they can share conversations between players and their caddies while on the course. There will also be a drone camera on-site that the production hopes to be able to use, weather permitting.

Something entirely new for the broadcast that both meets COVID-19 safety protocols and has eyes at being a new permanent element beyond the pandemic is the “Inside the Ropes” feature. This is a tented area that will be placed between the green of one hole and the tee box of another (as of publication the specific location for the Charles Schawb Challenge was not determined) with an unmanned camera and boom mic that players enter and give short answers to prompted questions that can then be woven into the broadcast.

The Charles Schwab Challenge is the first of 11 straight weeks of tournaments on the PGA Tour schedule. According to McManus, this production plan will be in place for the first four tournaments, with possible adjustments as the season progresses. McManus said he would not be surprised, however, if these were the plans for the rest of the year.

“Golf is the most difficult sport to produce to begin with,” McManus said. However, he continued, “we’re learning a lot of lessons, and some of the lessons that we’re learning will allow us to produce golf in a more efficient way.”

“The amount of detail that has gone into planning this, and having a backup plan to the backup plan, it has been extraordinary,” said Nantz on the conference call. “This crew’s ready for it. It’s as well planned out as anything I’ve been a part of.”