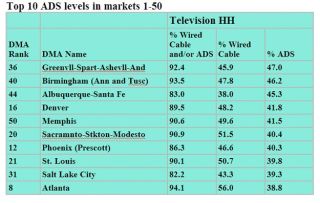 NEW YORK: A record number of American TV households are receiving video programming via an alternate delivery system, mostly via direct broadcast satellite, according to an analysis of Nielsen Media Research data for May 2011 by the Television Bureau of Advertising. Wired-cable penetration persists at a 21-year low.

“It would appear that the cut-the-cord phenomenon is real, and that has implications for the advertising community,” said Steve Lanzano, president of the TVB. “Advertisers who buy cable locally need to know that local wired cable systems’ ability to deliver commercials continues to erode. In fact, in quite a few markets, a majority of those paying for video programming are now getting that programming via ADS rather than from a wired-cable system. Local cable commercials are not seen in ADS homes, and so local advertisers need to deduct the ADS percentage of the audience if they are included in the cable systems’ submissions.”

In November 2003 Nielsen Media Research began making available hard-wired local cable numbers and excluding ADS homes via its Total Viewing Sources DVD. But some third-party processors are still adjusting their software products to use the DVD and the printed Nielsen books do not break out the numbers separately, so some advertisers still need to make ADS deductions manually, the TVB said.