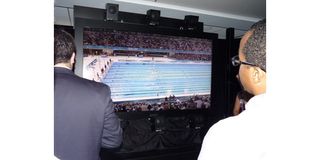 LONDON and WASHINGTON: For broadcasters, the Olympics is not only a ratings powerhouse, it also serves as a showcase to test and demonstrate new imaging technologies. In addition to several hundreds of hours of 3D footage demo-ed at the London Games this year, the next generation of high definition television is also being shown to the public for the first time. NBC Universal and Comcast demonstrated the Olympics in Ultra-HD at its Washington D.C., headquarters.

Japan broadcaster NHK, a pioneer in HD broadcasting, is collaborating with the BBC and NBC-Universal to produce several hours daily of Olympics footage in “Super Hi-Vision” (also referred to as Ultra-HD) and showing it on special displays in London, as well as to select audiences in Japan and the United States during the games.

NHK’s Super Hi-Vision demos are familiar to NAB and IBC attendees, as demos have taken place at those venues over the past five or six years, but the technology behind this year’s London demos is the next generation, according to Glenn Reitmeier vice president of standards and technology at NBC Universal. “It’s a huge engineering accomplishment,” he said.

Production begins with the acquisition of content on NHK prototype Super Hi-Vision cameras, at 48 Gbps. Content is captured in 8K (and displayed) at approximately 33 megapixels (7680x4320), 16 times the resolution of current HD standards on the market. Content is then edited down to 10 to 15 minute packages of Olympic events, including swimming, track and field, basketball and the opening ceremonies. Audio is captured for 22.2 surround sound.

For the Washington D.C. demos, content is encoded in H.264 and sent at 350 Mbps over Internet2, (a high-speed dedicated IP link, primarily for government and educational institutions) to a facility in Ashburn, Va., and then sent via Comcast fiber to its headquarters in downtown Washington, where it is displayed on an 85-inch LED backlit LCD display at 48 Gbps. Although technically the content, while canned, could be streamed live, Reitmeier said packaging the content and storing it on servers is better for demonstration purposes.

The project took 10 months to set up, according to an NBC Universal spokesperson.

NHK recently announced that it would begin rolling out Super Hi-Vision in Japan as soon as 2016 and for U.S. broadcasters, the format is being considered as a part of the ATSC 3.0 next generation broadcast standard. For consumers, Ultra-HD may be years in the future, but its inevitability seems certain, especially when considering the “wow factor” elicited when viewed for the first time.

For Ultra-HD, “the story is really about larger screens in the home,” Reitmeier said. “How larger could screens get? They could be wall-sized.”