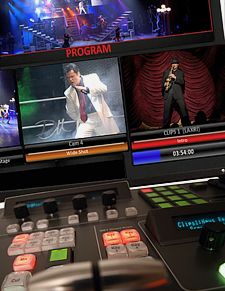 “The new Fluent Clip Store is an important milestone for Broadcast Pix,” said Ken Swanton, president of Broadcast Pix. “Some switchers in the industry feature limited storage for basic animations, but no other company offers a production switcher with a true clip store. With Granite Version 1.3, we are delivering HD clip and animation playback with stereo audio through our unique integrated content server.”

The new clip feature is easily accessible through the Granite’s control panel and displays file names on the switcher’s PixButtons. Thumbnails are provided, along with file names and metadata, and the clips play out in real time. Clips may be easily combined with switcher moves and graphics and Version 1.3 also provides a clip stereo audio output via XLR connectors on the rear panel of the switcher.