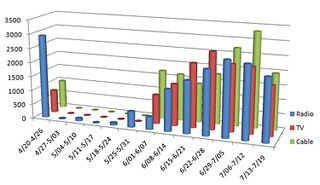 WHITE PLAINS, N.Y.: BP’s on-air campaign is slowing down, according to Media Monitors. The firm has been tracking money spent by BP on radio, television and cable. MM said this week that since April 20, BP has placed nearly 47,000 spots on air across the three media.

BP cranked up a public-relations campaign in the wake of the Deepwater Horizon oil disaster in the Gulf of Mexico. The incident provided a case study for Media Monitors to track and graph recent information about corporate marketing and advertising. MM says that not long ago, graphics based on actual aired content, issued almost immediately after the fact, would not have been possible.