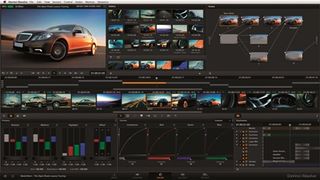 The user interface was overhauled to take advantange of multiple new technologies added to DaVinci Resolve in the last few years, including automatic 3D eye matching, multi layering timelines, XML support plus more camera and file type support. The new user interface is extremely fast to use and eliminates unnecessary clicks and settings to get working fast. A job can be up and running in three clicks: one to log in, one to drop media into the project and the next to grade.