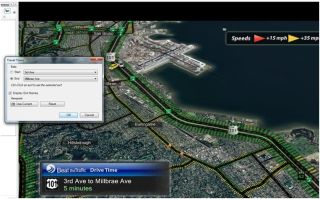 AMSTERDAM—At IBC2012, Beat The Traffic will showcase Beat the Traffic 3D 6.3, the latest version of its traffic reporting solution for broadcasters that features a richer set of customized tools, including "fly through" camera views and the ability to customize on-air graphics to display travel times for specific commutes. The new software, developed specifically for TV broadcasters, available in North America and most major European cities. IBC2012 takes place in Amsterdam, Sept. 7-11.

Currently used by 60 North American TV and media affiliates, Beat the Traffic 3D features animated maps and high-resolution topographical views that enable television reporters to zoom in on specific road incidents, including delays, accidents and roadway construction. Along with average road speeds and travel times, broadcasters can use the maps to provide accurate, up-to-the-minute traffic forecasts for their viewers, as well as customize them for specific audiences.

The company will also demonstrate how partner TV stations can be featured on Beat the Traffic mobile apps, which can display the exclusive local TV station partner based on where the mobile user is located. TV station partners can also receive a logo and branding on the app as well as provide mobile Beat the Traffic users with a list of routes that their traffic reporter has created - along with the reporter's latest traffic report and traffic updates from the reporter's Twitter and Facebook accounts.

Also being showcased will be Beat the Traffic 2.0 for the iPhone, currently available for free in Germany.

Beat the Traffic will be in Stand 2.A18.