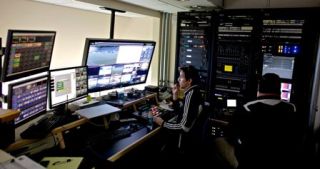 Built in 1926, JELD-WEN Field is an outdoor stadium seating about 20,400. The facility has had several major renovations, most recently for the 2011 MLS season, including the installation of a 37x20-foot HD video board and an upgrade of the two-level control room.

“We ran a really good show and everything worked,” explained Jennifer Smoral, director of events and promotions for the Portland Timbers, “but we came to realize quickly there could be a more efficient setup. We are pleased now that we are able to produce an even better in-game experience for our fans.”

To improve their game-day workflow and add fiber connectivity for stadium cameras (which wasn’t done in 2011), the Timbers hired ABS. Rather than start from scratch or install all new systems, ABS kept costs down by re-engineering the existing workspace.

The control room redesign allowed for a variety of updates, including moving the audio operator (and a compact mixer) into the lower part of the control room. Positioned between the PA announcer and scoreboard operator, the audio operator now serves a producer role during games as well. Meanwhile, the video content workstations—including technical director, graphics generator/LED operator, and replay operator—were re-clustered together on the second level.

ABS also provided new fiber connectivity to the control room, which upgraded the camera locations around the stadium to HD. During a match, the production team has access to up to eight cameras to cover promotions and game action.

As a result of ABS’ work, Smoral said the team is able to provide an enhanced on-screen product for its fans. Plus, the new configuration has improved the production workflow and reduced manpower requirements.

“Communication is much easier,” Smoral said. “We work smarter, not harder.”