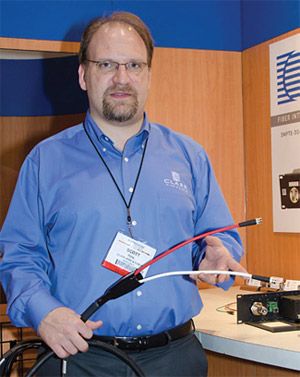 It's evident after this year's NAB Show that connectivity is as much of a requirement for broadcasters as it ever was. Something has to keep those "clouds" connected. From new BNC connectors that allow fast assembly, to rear chassis connectivity that doesn't care if it's fiber or copper, there was plenty to see at this year's exhibition

Belden demonstrated its new HD BNC coaxial connectors designed for use with Belden Brilliance coaxial cables. These BNC's feature a new construction that provides faster installations and improved durability, along with a new patented locking feature to ensure solid connections.

Bittree showcased its Bittree High-Bandwidth Micro-Video Patchbay, with a 2x48 format in either a 1- or 1.5-RU size. Bitree also featured its Category 6 and 6A rackmount patch panels, which provide rerouting and termination of gigabit Ethernet networks.

Fischer Connectors has partnered with Draka to introduce the Triax HD Pro+ Broadcast Solution, providing a minimum 30 The integrated cable and connector solution are designed for indoor and outdoor applications and show excellent results at 1'100m transmission distance using an LDK8000 camera. The company also launched its Ultimate line of connectors, which include a rugged, miniature and ultralight design.

Neutrik USA featured its powerCON TRUE1, an AC power connector which is lockable, exceeds IEC 60320 breaking capacity, and is designed to carry 16 Amps at 250 Volts AC.

Switchcraft unveiled its MMVP Series video patchbay, featuring 96 patch points in a 2x48 configuration that mounts in 1RU. The unit is rated to handle frequencies in excess of 3 GHz and meets SMPTE 242 specs. Also on display was the EH HDMI -feed-through in an XLR housing, which mounts to current XLR panel cut-outs.

Bluebell featured the TDM700, designed to provide an optical link between a remote “POV” Camera and an OB van or Control Room. Also on display was the BC 100/160 Series modular transport system and the BC323, which provides a compact and robust link for the conversion of two independent 3G-SDI signals into fiber optical cable.

Kings-Winchester Electronics showed the Kings Fiber Tri-Loc panel mount, which is compatible with the SMPTE304 standard, along with the Mini BNC, which meets or exceeds SMPTE 424M requirements.

Snell introduced a new range of fiber-optic interfacing modules that combine electrical-to-optical conversion with processing functions such as video synchronizing.

Telecast demonstrated its T-POV Robotic Links, a new family of fiber-optic links for robotic cameras. Also shown were additions to the CopperHead 3050 for electronic and satellite newsgathering, the CopperHead 3200 multi-camera solution, and the CopperHead 3400 for top-quality 3D production and live high-speed HD sports coverage. Also new was the TelePort 3G CWDM (coarse wavelength division multiplexing) wavelength manager, which provides high-bandwidth multiplexing for as many as 16 digital fiber-optic devices, along with the new TeleThon 3G optical and electrical multiplexer system.

Hannay was showing the AV Series reels. They offer welded channels for stacking, and are constructed of steel with a non-reflective matte finish. Other features include a removable side-mounted connector panel and adjustable friction brake.