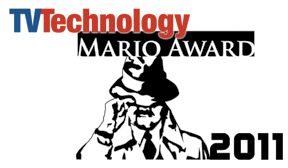 LAS VEGAS—You might not have noticed, but I'm not a bettin' man. Gimmee a sure thing any time; I want the deck stacked in my favor. Certainty talks, serendipity walks. So riddle me this, NABman… what in the blue blazes am I doin' in Las Vegas?

I'll tell what I'm doin' – and what I'm thinkin'. It's all about sure things, or in the worst case, "safe bets"… an oxymoron if ever I heard one. Emphasis on the "moron."

In a town that's famous for taking a chance, for getting' lucky, I walked all 2 million square feet of the Las Vegas Convention Center to find guaranteed winners among the trifles and treasures exhibited at the NAB Show. (Okay, so there's no such thing as "guaranteed," but you get what I'm after.)

I'm always on the lookout for ingenuity… superior smarts… and the Blackmagic Design team knocks me out every time. Their ATEM camera converter does all those obvious things you woulda wished for if Santa had asked you: accepts HDMI or SDI camera outputs, gives you tallies and intercom, and lets you use relatively inexpensive, garden-variety fiber to run your camera a long, long way from home… like 14,000 feet long. It's inexpensive; but considering what it does, it might as well be gold-plated.

Meanwhile, back in Vegas: What's one place where the chips are never down? You guessed it – Sony. For them, the chips… like the F65's 8K, 20MPx imager, at the heart of this amazing camera… are always up: up in size, up in resolution, up in dynamic range. It's not just a matter of bigger; the F65 chip abandons the traditional Bayer pixel pattern in favor of beefier green-channel performance; and that means both resolution and dynamic range that support IIF-ACES, the gold-standard encoding spec for electronic cinematography(EC). Of course, the F65 comes with more than just a chip… like a whole camera's worth of workhorse features, and frame rates from 1-120 fps; after all, it's got the Cine Alta badge, and that's been seen on all feature film sets since EC began.

If you're in the market for those high-end, real-time broadcast graphics—elections, channel branding, whatever—you've got two problems: You gotta smash the piggybank once for the big hardware system; and you gotta try to lure one of the only 12 qualified operators who knows that proprietary software package, and then smash somebody else's bank to pay the crazy salary they demand. VidiGo scratches their collective heads, and asks the pivotal question: What kind of flamboyantly-creative animators and artists are out there looking for work in great numbers? Why, Flash animators, of course! Poof—VidiGo Graphics, a new TV graphics system, is born; and best of all, it runs on garden-variety computers, with garden-variety video I/O hardware. I'm thinkin'—clever.

P. Julian Hiorns, Brick House Video
The big problem with shooting giant resolutions at giant bit depths is… whaddya gonna do with all those bits? Sure, you can tether your steed to a big ol' tape deck, but, hey… what is this, 1968? You need to be able to move, and it seems crazy to buy those oxide-filled cassette shells, here in the modern world. Convergent's lightweight solid-state recorders have been favorites for years in SD and garden-variety HD; but the Gemini's dual-link 4:4:4 architecture will either record that big, fat 2K signal of yours, or will record a 3D pair of 4:2:2's, too. Best of all, no more CF memory card swaps… how about removable solid state drives (SSD's)?

Dan Keaton, Convergent Design
A one-piece 3D camera ain't news no more, now that both of the big companies got 'em. But you've never seen a one-piece like Meduza's stereoscopic 3D camera: A pair of C-mount lenses mounted at the precisely correct intraocular distance; optical servos which precisely move the lenses in unison; and machine work so precise that interchangeable optical components drop into their optical planes… well, precisely. Get the picture? Well, you will… and you'll get it with a stunning 4K resolution.

At times the NAB Show looked like a meeting of the Lake Mead Happy Hiking Society—turns out people are streaming live video, using backpack type rigs that look mostly like canister vacuum cleaners, or maybe leaf blowers. And then I spotted Mushroom Networks' TelePorter, obviously developed by someone who has seen a TV camera before. It slips onto that industry-standard battery bracket we all love, which means you're still a free-roamin, un-tethered camera dude; it takes in whatever your camera gives out; and it connects using multiple, garden-variety USB cellular data dongles. It you're pipin' back to the station, there's a rackmounted "proxy appliance" that reassembles the video; or you can send the H.264 stream right to your server. Meets all of my KISS criteria: Keep IP Streaming Simple.

Puja Abid (L) and Rene Crus, Mushroom Networks
All around the show, I heard a word repeated over and over: "democratization." Now, my beloved papa, Luigi Orazio, told me never to talk about three topics: Politics, sex, and that hairy mole on Nana Isabella's chin. But I got the idea that by "democratization," we were draggin' out that ol' "Power to the People" riff : Give people crazy-sophisticated, crazy-cheap tools, and they'll change the world. Sound like you? Then you need Atomos' tiny, inexpensive Ninja that records your tiny, inexpensive, HDMI-equipped HD camera's output onto removable solid state drives (SSD's)… and gives you an LCD production monitor to boot. No more excuses—start changin' the world.

Wish I had a nickel for every cable tie I used wrapping extra wires onto the camera coax. These days, the audio may be embedded in that coax, but a power line… that's gotta be extra. Or does it? Brick House Video (BHV) just says no! They'll send that camera power up the line through the same coax, using their new Video Ghost. Want to move the camera upstage, downstage, underground, up in the air? Forget the power cord, or the massive battery; skip the brick, and head for the Brick House.

RTI's John Vasquez (L), Antonio D'Agostino, Michael Ruffolo and Silvia Catozzo
You gotta love any company that decides to build cinema production equipment in the Big Apple, and it's even better if the company makes products that are easy to love. MYT Works makes the prettiest and smoothest tabletop glide tracks for cameras big and small, including plenty of ways to mount the camera. You can even take the camera off the track and put it on a "skate" to roll on the floor, all while using a standard 100mm ball pan/tilt head of your choice. Small, slick, smart and from the city that never sleeps…

Peter Ijkhout (L) and Reinout Lempers, Vidigo Graphics
I've seen it over and over in comic books: A seasoned, proven veteran has greatness thrust upon them… stepping into an heroic role when no one else can save the day. RTI's Tapecheck Proline 4100 tape cleaner/evaluator seemed destined to retreat into the shadows as "tapeless" took the limelight; but when an earthquake and tsunami wiped out Japanese tape factories, RTI came up with an HDCAM SR version which literally saved the day, cleaning and certifying previously used reels and returning them to service. Television and feature film productions, perched on the brink of disaster, owe superhero RTI a debt of gratitude.