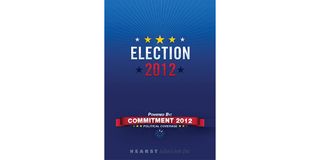 The folks at Hearst are bringing the company’s “Commitment 2012” political coverage straight to viewers’ smartphones and tablets with the Election 2012 app. The group launched the app in early September. Hearst has been running its “Commitment” campaigns every four years since 2000. In the 2008 presidential election, Hearst was awarded a Peabody for its efforts. This year, Hearst’s 25 news-producing TV stations have committed to air 12 minutes of political coverage each weekday in the 30 days leading up to the primary and general elections. And 2012 marks the first time the group is aggregating all of that political coverage— including stations in the 12 battleground states—into an app intended to help educate and inform viewers.

“This app will be tied to all of our coverage,” said Judy Stone, Hearst’s digital product manager. “Whenever we air relevant stories or post things online, we will mention the app.”

The app is free and ad-supported and it will be available via both Apple’s iTunes Store for iPhones and iPads and Google Play for Android users. Hearst stations will power the app with Internet Broadcasting’s new IB Publish 2 platform, which allows producers to upload content to the Web and distribute it automatically across platforms.

NATIONAL NEWS
Besides the platform, St. Paul-based Internet Broadcasting also has partnerships in place with CNN, Reuters and other national news agencies, which it curates and adds to national news feeds that stations can include on their websites. IB clients include Bonten Media, Hearst Television, Morgan Murphy Media and Post- Newsweek Stations.

“The most significant difference between IBP2 and its predecessor and most Web content management systems is that IBP2 is a dynamic publishing system,” said Scott Libin, IB’s vice president of news and content. “Our sites can set up dynamic queries for specific categories and then automate publication of a lot of that content.

“The big thing is what IBP2 does for station employees,” he said. “It frees them up to dedicate other resources to other work. Every minute that a site editor in Miami doesn’t have to spend on national, international, and feature-y sticky content that we can instead provide means they can focus on local news. The rest of it they can set up and let run.”

With the implementation of IBP2, Hearst’s app will have access to reams of content. All of Hearst’s 25 stations will provide stories, videos and other political coverage. Each station will offer a local voter’s guide, including information such as deadlines to register to vote, polling locations, candidate bios and perhaps most importantly, candidates’ stands on the local issues.

The app will provide IB’s national news feed as well as a countdown clock to Election Day.

Individually, viewers can submit user-generated content, such as photos and videos, to Hearst’s “u local,” or they can hop over to Facebook via the app. They also can customize the app’s home screen with a photo or other image that represents their home market.

While users can click on the app to check into what’s happening in their own market, it won’t automatically geotarget users. Hearst did that intentionally to encourage people to explore political news coming from across the country, not just from their own market.

“We wanted to make all of our content available to all users,” said Stone. “Once you open the app, you can drill down to whichever station and market interests you.”

LIVE WIRE
Election 2012 also will offer users dynamic content, including access to Hearst’s Live Wire, which runs on its station websites and is a constantly updated feed of all sorts of content, including uploaded photos and videos, Twitter and Facebook comments and links to stories.

“Some call it a live blog, which is misleading,” Stone said. “It’s more a progressive reporting tool. You can view it on mobile or on this app. It provides top-notch coverage of a breaking-news story. It’s able to pull in all of the information around a breaking news story in one easy-to-use place.”

Beyond the Election 2012 app, Hearst’s Washington, D.C. bureau also is teaming up with the Tampa Bay Times’ PolitiFact, a fact-checking website, to produce segments incorporating the site’s “Truth-o-Meter.”

IB also provides Hearst and other clients the ability to send out email news alerts that viewers can sign up to receive.

“We send out email alerts that link the recipients directly back to our TV station clients’ websites,” Libin said. “Any time there’s a significant development, we’ll fire off an email alert to a station’s subscribers and link directly to their websites. Then we sit back and watch traffic go up within 10 minutes or so of every alert that goes out.”