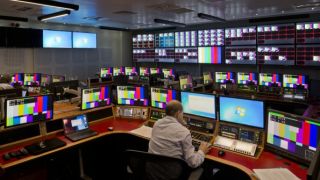 SIS LIVE has installed a large Optocore fiber ring on a 2.21Gb/s network along with BroaMan Repeat48 SDI-to fiber converters at the new MediaCityUK. This major broadcast project was successfully conducted by the SIS LIVE projects and integration division, under Dave Gill.

Seeking to implement a fully redundant network, SIS LIVE broadcast designer Alan Laird believed that an Optocore audio network would offer the best solution given the lengthy cable runs involved; the fact that his OB colleagues had successfully run an Optocore system at the 2010 Commonwealth Games in Delhi, underpinned his decision.

Once the hardware decisions had been made he created a vision routing architecture based on embedded audio distribution, constructed around two 576 x 1152 routers.

The main router is a hybrid design, which generates the MADI sources for the Calrec and Yamaha sound desks, while a similar sized monitoring router is used as a back up.

In addition to the back-up system, Laird also wanted a network that could be used for ad hoc work — so that any microphone or audio sources could be picked up from anywhere within the production facility over the Optocore network.

The Optocore configuration was co-designed by Laird and Chris Payne, in cooperation with Optocore support engineer Maciek Janiszewski, and the system is based on the Optocore’s new 2.21 protocol.

The plan had been to use Optocore’s YG2 cards to allow direct connection of the new Yamaha LS9 consoles and DME64 and DME24 mix processors to Optocore’s digital network. But in view of the high channel count, the spec was upgraded to Optocore’s new energy-efficient and more powerful R-Series devices and 20 of the new Y3R-TP cards, connected to various FX devices. All Optocore equipment was supplied by Tyrell.

The new Optocore architecure is based around 12 Optocore IDs and uses 648 inputs, realized from 19 Optocore units. The first phase includes five DD4MR-FX MADI converters and eight X6R-FX, a DD32R-FX main interface and 14 x Y3R-TP. In the second phase SIS LIVE will purchase the remaining five DD4MR-FX units and six more Y3R-TP’s once the other galleries are built. The Y3R-TP cards are fed from the SANE port on the X6R-FX or DD4MR-FX converters.

Faced with a reduced timescale to install the galleries on an HD/3G backbone, and concerned about cable lengths, SIS LIVE were impressed that the company’s fiber routing systems had extended to video (with the setting up of BroaMan) and noted the smooth operation and cost efficiency.

As a result, 22 BroaMan Repeat48 units, which convert up to 24 SDI or MADI coaxial signals to optical fiber within a 1U device (equipped with dual redundant power supplies), were commissioned — working within a Miranda vision distribution environment. The multiple 24-way fibers have been installed to each production room with a Repeat48 at each end, and Ethernet multicore cable and PSN 25 for the GPIs.

This topology has more than satisfied the distribution requirements of an installation that will be maintained by SIS LIVE’s broadcast engineers.