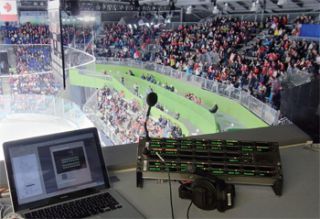 VANCOUVER
The intercom systems required to smoothly run the Olympics are of… well, olympic proportions. More than any other system, intercoms at the Olympics require every trick in the communications playbook, every type of component interfaced in every possible way.

The 2010 Winter Olympics was spread over more than a dozen major venues, each filled to the rafters with production staff that required communications. Each of those venues needed to be connected to each other in a way that makes sense for the event's producers, and there had to be a way to make the inevitable last-minute changes that blindside the technical staff once production got underway.

The Clear-Com V-Series panel in the center of this photo provided intercom connectivity for a variety of production staffers in BC Place. Photo by Jake Dodson In Vancouver, production crews were hired from all over the world and some crews insisted on specific intercom equipment. In BC Place, site of the opening and closing ceremonies, the production was run by David Atkins, who in turn hired an Australian company "P.A. People" to design and operate the intercom systems.

P.A. People was familiar with Clear-Com gear, dating back to the 2000 Olympics in Sydney. Barrett knew that he needed something with great flexibility, and chose Clear-Com's V-Series systems for BC Place because of its two connection methods: a proprietary time-division multiplexing (TDM) cable connection and a standard IP interface with an Ethernet port.

"The ability to quickly deploy a key panel to anywhere on our LAN became key to support creative changes on this event," Barrett said.

To support the intercom network, Barrett and his crew laid out a fiber-optic LAN for which the only function was to carry intercom information. This was controlled from a 240-port Clear-Com Eclipse Omega digital matrix intercom switcher fitted with two 32-port IP cards.

"Since the Athens Olympics in 2004, we've been deploying IP networks alongside our traditional analog infrastructure for delivery of other services," Barrett said. "Clear-Com's IP core has allowed us to leverage not only our own temporary LAN, but also the Olympic WAN to deliver stable and reliable intercom to users away from the main control room."

"We had users moving between TDM and IP panels without any concern, they simply did not know there was a difference," Barrett said. "That was key for us, as the end users don't care about technology—they just want to communicate."

IP capability makes it possible to put an intercom panel anywhere you have an IP port, which came in handy when producers suddenly realized that they needed an intercom channel from the ski facilities up on Whistler back to BC Place. Barrett dispatched a technician with a Clear-Com V-Series panel and plugged that into the Olympic WAN that the organizers in Vancouver had previously installed. A second V-Series panel at Whistler with an analog four-wire adapter provided connection between the Clear-Com systems in BC Place and the RTS production intercom at Whistler.

Within BC Place, more than 500 wireless users were connected with Motorola two-way radios and simplex radio interfaces. The system even included a connection to a standard POTS telephone.

Clear-Com refers to the combined TDM/IP system as a "hybrid," since it provides seamless operation between two different network topologies (fiber and IP). Within Clear-Com's system, any feature available on the TDM network is also available on the IP network—and that's true regardless of where in the world a panel is connected to an IP network.

BACK AT THE IBC

RTS intercoms were in wide use throughout the International Broadcast Center (IBC), the main facility that all broadcasters shared. RTS has its own implementation of IP networking, called RTS Voice Over Network (RVON). Using RVON, many international broadcasters were able to get complete intercom functionality in distant locations, including functions such as contact closures and RS-485/232 serial data.

There were at least three RTS ADAM multiframe systems in the IBC with the latest expansion feature called Tri-Bus or TBX. This allows for multiple frames to be bussed together in order to create a single large system consisting of as many as 900 ports.

Since this technology uses Ethernet for control and fiber for audio transport, frames can be at the ends of long cable runs and still work as a single system. One broadcaster's facilities were on multiple floors and thus that network's ADAM TBX frames were widely separated as well, yet it all worked as one system.

The 2010 Winter Olympics represented one the first large-scale deployments of RTS' new KP-32 CLD color display keypanel. One broadcaster decided to use this panel almost exclusively and had several hundred on site.

This Riedel Artist panel was used by production staff working hockey games in GM Place. The broadcaster took advantage of the KP-32 CLD's ability to display 4-, 6- or 8-character alphanumeric descriptors by using the top row of four characters for the panel's location and the bottom four characters for the ID. For example, the top read "IBC" and the bottom read "DIR" for the director's position. These more descriptive alphanumeric displays eased the learning curve for the production staff.

As a major intercom vendor, Riedel was also well represented in Vancouver. More than 70 Riedel Artist digital matrix intercom systems and thousands of the company's digital radios were used at the Vancouver Games. Riedel also coordinated several wireless video links for the host broadcaster and supplied intercom systems to such major national broadcasters as NRK, BBC and ZDF.

The Vancouver Olympic Organizing Committee (VANOC) used Riedel intercom systems as the main operations backbone for official Olympic activities. This consisted of more than 60 Riedel Artist digital intercom matrix systems that tied the venues together. Most of the event referees, timekeepers and assistants communicated using Riedel Performer digital partyline systems, and more than 500 Riedel digital beltpacks were used in Vancouver.

In addition, Riedel provided 14 venue information systems for the host broadcaster, which were used by journalists and visitors to get additional information and video content on site. Riedel also furnished several wireless video links for skycams at the Cypress Mountain and BC Dome venues, as well as for the opening and closing ceremonies.

In any large-scale television production, intercoms are probably the least noticed by viewers and most appreciated by the production crew. For a production the size of the Olympics, planning for the intercom networks begins at least a year before and setup at the show can take weeks. And if a central component of the intercom system fails, it is next to impossible to do the production as planned.

The broadcast of the 2010 Winter Olympics was a hit with viewers, and a reliable well-engineered intercom system was the cement that held the foundation of the production together.