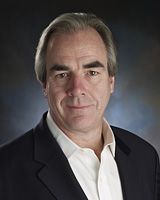 Q. What kind of products or services does your company offer for broadcasters?
We offer broadcasters a wide range of graphics solutions for on-air and digital video applications in newsrooms, studios, sports broadcasting facilities, and corporate video environments. Our Axis World Graphics online content creation software and order management system brings the power and convenience of the cloud to broadcast operations. For operations on the ground, we offer on-air graphics systems such as the HyperX3.1, LEX3.1, and MicroX3.1; clip servers such as XClyps and MicroClyps; the Channel Box² Branding and Promo System; and the CAMIO graphics asset management server. Tailor-made Chyron BlueNet workflows leverage these systems to their greatest advantage in any application. The Chyron creative services division also provides custom-designed graphics packages for events such as elections.

Q. What’s new that you will showcase at the NAB Show and that TV broadcasters should look for there?
At the 2012 NAB Show, we will demonstrate MediaMaker, a new technology that integrates Chyron graphics with file-based workflows. MediaMaker extends the graphics capabilities of Chyron systems to a wide range of editing systems and other third-party applications. In doing so, this exciting new solution gives video editors and graphic designers access to the same graphics and animations that are being used live on the air.

We will also show our newly enhanced Channel Box² (v.4.6) branding and promo system at the NAB Show. In addition to offering improved asset handling and enhanced panel control, this new version of Channel Box² introduces a software-based social media editor that allows the operator to monitor and pull incoming Tweets from any feed and quickly display the Tweets on-air. We’ve also incorporated locking scenes and copy/paste/reverse functionality that users can couple with a scene list in order to create and stylize groups of scenes with ease.

Our Desktop MultiViewer also makes its debut this April. This new application lets any operator, including a master control operator, monitor and control multiple remote desktop systems simultaneously from a single desktop and application without affecting any on-air devices. However, if necessary, the operator can easily manage and control a particular playout system by maximizing the view of that system.

Q. What do you anticipate will be the most significant technology trend at the 2012 NAB Show?
Social television seems to be the buzz this year, and it is the most anticipated technology trend for the 2012 NAB Show. It’s no secret that while watching television, consumers are accessing the Internet through smartphones, PCs, or tablets. Many consumers comment on the shows they are watching on various social networks and via dedicated social TV apps. Social television is changing the face of live broadcasting, the viewer experience, as well as the broadcast business landscape. Chyron isn’t the only company to recognize this transformation with new product and feature releases, and we look forward to seeing the various technologies and strategies that broadcast solution providers — and the industry as a whole — are embracing to address this fact.

Q. Where are you based, and how many employees do you have? Anything else we should know about your company?
Chyron is headquartered in Melville, N.Y., and currently employs 129 employees.