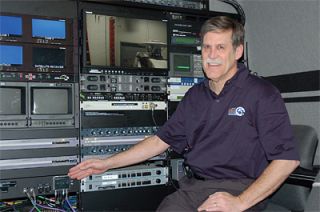 Berry Pinney
CLEVELAND, OHIO: Getting reliable remote live shots is critical in the television ENG business. When we started experiencing problems receiving video from the field using 64-QAM and 16-QAM modulation formats for HD, it became evident that we needed to change to QPSK. After exploring several possibilities, we found the only way we could do that economically and with confidence was with IMT's Nucomm Newscoder 4 encoders.

The Newscoder 4 is a really compact, low-power device that delivers superior MPEG-4 H.264 video and has enabled us to transmit HD content efficiently over the same infrastructure used to transmit standard-definition content.

DIFFICULT SHOTS NOT A PROBLEM

Our DMA covers about 20 Ohio counties, and some of them are quite a distance from any of our receive sites. When we made the switch to QPSK it really made the difference, allowing us to relay quality video back from sites that were previously impossible. And, equally important, our live shots are much easier to set up using QPSK technology.

Shooting live pictures in downtown Cleveland has never been easy. We've always had to deal with lots of reflections and bounces, even in the analog days, and when we switched over to digital and HD, getting quality picture signals became even worse. However, once we installed our new Nucomm Newscoder 4s, truck operators were able to bring in a live shot in one-third the time, and no longer have to worry about losing it midway through.

The upgrade to Nucomm gear has also been beneficial for our courthouse shots. We were using a portable system that required first shooting from a window down to a live truck and then retransmitting it from there to the remote site. It took a crew of four people to make that work. With the Newscoder 4s, we can shoot through the courthouse walls directly to the receive site. Also, we can leave the system set up without any additional crew, which is a significant help to our bottom line.

GIVING THE SAT TRUCK A REST

Getting long haul shots back to the studio with the Newscoder 4 is really spectacular. A case in point is a venue located two counties away; we were never able to get a live shot from our microwave truck, due to the distance involved and the presence of trees in the area. Now with the Newscoder 4, we're consistently able to make the shot without having to fall back on our satellite truck.

We've used Nucomm products for quite some time and have always been happy with the quality, price point and customer service that we've received. We use Nucomm's ChannelMaster transmitters in all of our trucks, along with the company's Newscaster CR6D central receivers and Newscaster portable diversity receivers for our six remote sites, along with their Ultrascan DRII antenna system. Thanks to Nucomm's microwave equipment, we were one of the first stations here to successfully do full-time HD field acquisition and HD field remotes. This gear has really made a difference for us.

Berry Pinney has spent more than 20 years in television broadcast engineering and has served as director of engineering and operations at WEWS-TV for the past six years. He may be contacted at pinney@wews.com.

For additional information, contact IMT at 800-968-2666 or visit www.imt-broadcast.com.