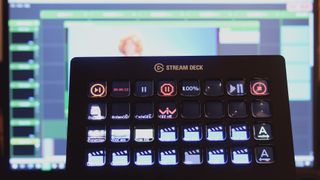 VEENENDAAL, Netherlands—WebClip2Go, a division of Burst Video, has introduced its Stream Deck platform that adds live switching to its video production suite.

WebClip2Go is designed to simplify editing components and move them to the front of the workflow so as to be deployed in multi-use batches, essentially doing the editing before the post-production process. This includes the ability to re-use “pre-created” scenes where new to-camera content is added as required.

The new live switching module enables for the presenter/video producer to trigger the scene elements at will and exercise a greater level of control over how filming progresses as it progresses, according to WebClip2Go.

The Stream Deck unit constitutes an Elgato Stream Deck controller, available with six, 15 or 32 fully configurable buttons. The buttons can be set to perform different video functions, including loading a pre-set scene; performing functions like play, pause and record; overlaying graphics and effects; and switching between cameras in a multicamera studio setup, or in order to access a remote camera input.

The button setup is plug and play, with the process of configuring each button done through menu selection. Each button can be loaded with a graphic. In addition, when features have been triggered by a button that preclude the use of other buttons, these buttons turn grey until they can be used again.

WebClip2Go says that the new feature can be particularly useful in interview-style videos, live streaming and webinars. When the WebClip2Go is combined with the Stream Deck and is used to create live streams, three separate videos of the production are still recorded to disk—the composited live stream and two additional sources, allowing for the post-edit of the video after the original broadcast.