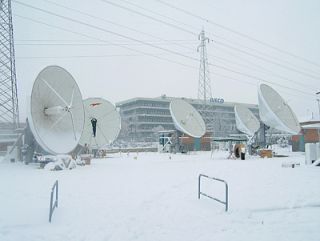 Vislink support keeps Turin’s Skypark operation in all kinds of weather.
TURIN, ITALY
Skylogic is a subsidiary of Eutelsat and is an Italian satellite and broadband services communications provider. The company owns fixed earth stations at Skypark Turin, one of the world’s largest platforms for bi-directional IP services.

The Turin site was initially used for providing high-definition television broadcasts of the XX Olympic Winter Games at Torino in 2006, with a private fiber/satellite video network provided by Eutelsat.

During the Winter Games, Skylogic deployed and operated a comprehensive TV network for the Olympic community with satellite delivery of 50 encrypted channels to more than 12,000 displays. In addition to this dedicated television network, Eutelsat and Skylogic provided broadcasters with services and facilities for delivering television coverage around the world. It was the first time in Olympic history that satellite services were used as the primary channel for live broadcast feeds.

Since that time, Skypark has grown exponentially in supporting expanding voice and data transmissions.

Eutelsat appointed Advent, a Vislink subsidiary, to serve as the main supplier for Skypark. The company has acted as both technical and commercial adviser to Skylogic. Vislink Services’ specialist team worked with us to design the original installation, as has continued to support our ongoing requirements as our business has evolved.

Vislink Services assembled an experienced team of engineers for us to make sure that all of the installation, commissioning and integration activities would be carried out in a minimum amount of time.

Vislink Services has also assisted Skylogic in making provisions for the redeployment of our antennas so that communications services can be moved between satellites if required due to the frequent ice and heavy snows typical to this region. In addition, Vislink Services took on the regular and routine preventative maintenance of Skypark satellite systems to ensure that everything is always fully functional.

Our company’s commercial success after the conclusion of Winter Olympics brought with it the need to expand facilities at the Skypark complex. Vislink Services has assisted us in this effort by installing six more antennas and relocating and/or upgrading four of the original antennas. The company also integrated these antennas with the site’s network and control system, and Vislink’s Remote Management and Control software has proved invaluable both during and after these changes.

There are now 15 satellite antennas at in use Skypark, measuring between 3.8 metres and 6.3 metres, and operating at Ku-band DBS and Ka-band frequencies.

Skylogic continues to work with Vislink Services as we continue to expand services. Vislink’s background in large scale earth station construction, coupled with their technical expertise, has provided the level of competence necessary to allow us to proceed in our pattern of growth and expansion with confidence. The company is flexible enough to move with our requirements and has become a supportive and knowledgeable partner in our operation. We will continue to work with Vislink on other projects at this and other sites, as we are more than satisfied with their service and support.

Dominique Evrard is RF manager at Skylogic Italia. He may be contacted at devrard@skylogic.it.

For additional information, contact Vislink at 978-671-5700 or visit www.vislink.com