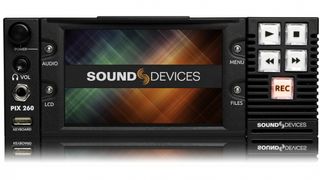 Sound Devices showcased its new PIX 260 production audio/video recorder at IBC 2012. Based on the field-proven PIX 220 and PIX 240 recorders, the rack-mounted PIX 260 is a file-based video/audio recorder/player that seamlessly replaces tape-based video decks in production and post-production environments.

Using the Apple ProRes or Avid DNxHD codecs, the PIX 260 records and plays files up to 220Mb/s in high-quality 10-bit 4:2:2 video. It also records 32 tracks of 48 kHz audio. Files from the PIX 260 are ready for direct import into Avid and Final Cut editing platforms, eliminating time-consuming transferring and transcoding. Files can also play out of the PIX 260 for real-time applications.

The PIX 260 has a built-in 5in 800 x 480-pixel IPS video display that allows users to view video and setup-menu selections. With its extensive control capabilities, the PIX 260 is a flexible video playback source that is compatible with Final Cut Pro 7, Final Cut Pro X and Avid sessions. The PIX 260 can be controlled by both external RS-422 and via Ethernet through its embedded Web server, allowing for machine transport control over Ethernet-based networks.

The PIX 260 includes a built-in Ambient Clockit time-code generator/reader with genlock output for multicamera and double-system sound applications. In addition to generating time-code, time-codes can be read from the SDI stream, the HDMI stream or from an external source.

Like PIX 220 and PIX 240, the PIX 260 includes a scaler and frame rate converter. Regardless of the incoming signal, the PIX recorders can record the signal after up/down/crossconversion at the same rate or a different rate. Hardware-based 3:2 pull-down removal is included as well.

PIX 260’s half-rack, 2U chassis dimension allows it to be easily integrated into any existing environment. It is powered by 10VDC-27VDC through its four-pin XLR connector.