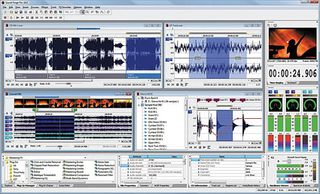 Sony Sound Forge Pro 10 is the most recent upgrade of the venerable Sound Forge audio editing software that has existed for more than a decade. It has been expanded to include audio editing for HD video files and offers more than 40 processing effects. This latest version supports the highest resolutions in use, as well as Dolby Digital AC-3 surround sound.

Sound Forge Pro 10 runs only on the Windows platform (Windows 7, XP or Vista). The system requirements are modest: a 1 GHz processor, a Windows-compatible sound card, at least 512 MB of RAM and 350 MB of disk space for program installation.

Sound Forge Pro 10 can work with multiple channel files, such as XDCAM and previously created mix files, with a capacity of up to 32 channels.

The application possesses all of the necessary audio enhancing tools, such as EQ, reverb, delay, chorus and pitch shifting. All of these effects are designed to provide quick setups using presets, or more intricate control for seasoned users. In addition to commonly used effects, there are dozens of others that can improve sound quality, stereo imaging and frequency balance. And there are a few that provide the audio equivalent of psychedelic visual effects.

A very useful tool for improving recordings is the Noise Reduction 2 plug-in collection. This includes an effective tool for detecting and reducing background noise, as well as a restoration tool that reduces noise and removes clicks and crackles.

The audio tracks are displayed on a time line, which also displays a video timeline above it when working with video files. This layout allows the user to expand the visual audio waveform and execute selection, cutting and pasting of sound fragments with surgical precision. There are also tools that allow the user to remove a portion of unwanted or defective sound and clone the gap with neighboring audio data or paste it from another track.

I installed Sound Forge Pro 10 on a computer with a 2.66 GHz Intel processor and 3 MB of RAM running Windows XP. The installation was trouble free.

I started my test with video files and was delighted to find that I could import almost any of the QuickTime formats that I'd created. A few files saved in the more obscure codecs would not display video with the audio, but most did. The range of formats that could be imported was surprisingly large, including QuickTime SD/HD, all SD formats and MPEG-2. I was even able to import audio and video from a DVD and H.264 files from the new Canon Digital SLR cameras.

Sound Forge Pro 10 is adept at handling some of the recurring audio problems in video production—including noise, poor equalization, and improper levels.

Sound Forge Pro 10 has an excellent noise reduction utility that I tested on several audio problems.

I started my evaluation with a video clip shot in HD. The video was great, but the subject was musicians in a noisy nightclub, with their voices being buried in background noise. I brought up the Noise Reduction tool and was quickly able to make dramatic improvements in the overall sound. This tool allows you to sample the noise and make fine adjustments to tune out unwanted sounds. With a little practice, it works beautifully.

My next test involved a music recording. My evaluation material was an acoustic group playing in a practice room. The overall sound was flat and lacked depth. By using several of the tools I achieved marked improvements in the sound. I started with EQ, and found three very useful versions: Graphic, Paragraphic, and Parametric. Paragraphic was my favorite, as it allowed me to see the areas of the spectrum that I was boosting and precisely control their placement. While monitoring the result in real time, I could hone in on frequency regions that needed to be raised or lowered.

Reverb is a staple of sound enhancement for music, and I found the choices and controls in Sound Forge Pro 10 outstanding. There are 19 presets, covering everything from a metal tank to a concert hall. There are effective controls for contouring the reverb, as well as an option to attenuate base and high frequencies, as these often get artificially magnified with reverb. As the original recording was done with only two mics, I used the Pan/Expand effect to exaggerate stereo separation. The result was an impressive improvement over the original recording.

It was easy to keep adding additional effects. You can return to any effect you have added and make adjustments to it, providing flexibility to refine individual effects as the combined effect alters the overall sound.

The real-time preview of effects is rock solid. Previews are instantaneous and accurate, which allowed me to immediately know the result of each effect as I adjusted it.

Another nice feature is that you can have numerous audio projects open at once and switch between them by clicking on a tab on the bottom of the timeline.

I attempted another project that turned out well—restoration of a vinyl LP. Sound Forge Pro 10 provides utilities especially designed for this. It includes an Audio Restoration tool to reduce background noises such as hiss or surface sound, as well as tools for click and crackle removal.

In terms of improvements, some more attention to making the effect controls more graphically-based would be nice. I also think there should be an Apple Macintosh version, as there are many video editors and sound engineers who work exclusively on Macs and they could benefit from the extensive tools Sound Forge Pro 10 has to offer.

Sound Forge Pro 10 is one of the most comprehensive and intelligently engineered audio enhancement suites on the market. With such a vast array of tools, effects and processes, one can improve, repair or transform any audio source on the planet. It is highly versatile, and well suited for music projects, creating CDs, improving audio from virtually any video format, and even recording original tracks.

Geoff Poister, Ph.D., is a member of the Film and Television faculty at Boston University and a regular contributor to TV Technology.