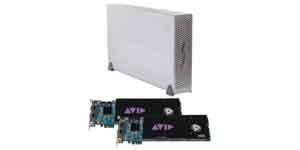 A supplementary connector has been added to the Echo Express Pro to connect power cables between the chassis and PCIe cards that require additional power, including the Avid card. With this Thunderbolt technology-based product plus the purchase of a Sonnet-exclusive power cable kit that supports one or two Pro Tools|HDX PCIe cards, Mac users are no longer limited to a Mac Pro-based workflow in order to exploit the tremendous capabilities of Pro Tools|HDX2.

Echo Express Pro — part number ECHO-EXP2F — which supports Pro Tools|HDX cards, will be available Jan. 30, at a suggested retail price of $799 through Sonnet, and later through Sonnet resellers.

Attendees of the 2013 NAAM Show can see the Echo Express Pro with the AvidPro Tools|HDX PCIe card at Sonnet's booth 7620.