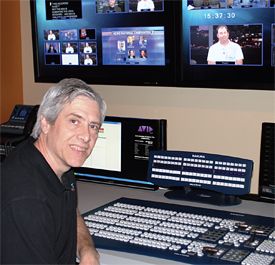 While some of these projects are designed to go live to air, many of the shows are done “as live.” Yet others are shot in segments with a switched feed and/or camera isos.

Last fall, following a successful capital campaign that supported the complete overhaul of our studio and control rooms, we purchased a Snell Kahuna HD/SD multiformat production switcher. After living with 20-year-old switching technology, we feel we’ve definitely caught up to modern times thanks to this new switcher.

Our new Kahuna system features Snell’s 3 M/E compact control surface and is set up for 64 inputs mapped to 48 crosspoints and has 12 outputs. It includes two twin-channel 3D DVEs, a clip/still store with 12 memory stores, and input/output color correction. We also invested in the companion GUI, master aux panel, and a 1RU remote aux panel. The Kahuna anchors the control room, with a four-channel Avid AirSpeed server controlled by Avid’s iNEWS Command software in playout mode, and Avid’s Capture Manager when we’re recording.

During production, the mixing of video formats had previously been a major concern for us, whether it was 4:3 standard-definition legacy material that was still being sourced, or perhaps differing formats on the output side. After some investigation, we looked at new switcher options, and felt that Snell’s FormatFusion provided the easiest and best way to address our particular operating requirements. (FormatFusion is a proprietary Snell technology that enables standard-definition sources to be seamlessly integrated into HD products without the need for upconversion.)

We also liked the Kahuna’s keyer layout, along with the power of its effects. And its ease of operation just can’t be beat. At the end of our evaluation phase, all of our directors put the Kahuna at the top of their list as our next production switcher.

We’ve quickly come to rely on the new capabilities the Kahuna production switcher gives us. The availability of an on-board clip/still store sure beats working with a combined DDR and character generator setup, and the resizers on every key leave Kahuna’s 3D DVE open for more sophisticated moves or DVE transitions that are just a button push away.

The system’s powerful integrated color correction capability ensures accurate images. And as the switcher features macros that can be assigned anywhere, many of our production operations have become much more manageable.

With the installation of our Kahuna switcher, everything in our facility makeover has come together and is working well. And while we still have to take care of a few details—such as the incorporation of switcher control for our playout servers—when we consider where we were just six months ago, such shortcomings don’t really seem bad at all.

Kevin Lambi has been at KCPT for nearly 13 years and serves as the lead director on many major productions. He may be contacted atKevin_Lambi@kcpt.org.