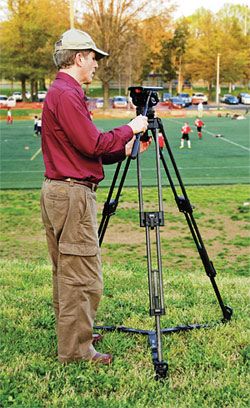 Secced is a Chinese manufacturer of camera support products, including a wide range of tripods and pan-and-tilt heads. The Reach 8 is in the middle range of the company's lineup, which scales up and down to support everything from small semi-pro cameras to field camera systems with big lenses and prompters.

The author readies the Secced Reach 8 camera support package. Photo by Mary Ellen Dawley The company's literature for the Reach 8 boldly says that its products' build quality and performance are every bit as good as the big names in the industry. Considering just how good some of the big-name products are, I was interested to see how the Secced Reach 8 compared.

The Secced Reach 8 consists of a model SC-EFP/CF100D carbon fiber tripod and a SC-V15/100AH fluid pan-and-tilt head, mated at a standard 100 mm bowl. Supplied with the pan-and-tilt head is a single pan arm that can be attached on either side of the head and mounted at any convenient angle. The SC-V15/100AH head has a capacity of 36 pounds, while the SC-EFP/CF100D tripod has a load capacity of 198 pounds.

The 18-inch long pan handle has a thick and comfortable rubber grip on the end. A lighted bubble level on the head makes it easy to square up the system on the ball mount.

The SC-EFP/CF100D tripod has two-stage carbon fiber legs. Each stage has long and sturdy lock levers to quickly set the extension of the legs. There's an adjustable floor spreader to keep the legs together and help maintain stability.

One nice feature about the legs is that they can collapse only so far—maintaining a space so that your hand won't be crushed if it inadvertently happens to be at the top of the leg. I discovered this nice safety feature on my first shoot with the Reach 8, realizing that my hand could have been squashed with a less-thoughtful design. Considering that the tripod can support 190 pounds, I'm thankful the gap is there.

The floor spreader attaches to the legs with heavy rubber couplings that also form feet for the tripod. If you take the spreader off, it exposes steel spikes that can be used on soft surfaces.

The Secced Reach 8 is built for serious field production work. The pan-and-tilt head works best with a payload of at least 12 pounds, and it will loaf along all day with an equipment load of 25 pounds. If you have a field setup with a long lens, extra monitors and a prompter, the Reach 8 can accommodate it with no problem.

The deeply knurled adjustments for pan drag, tilt drag and counterbalance spring are big enough to be used with gloved fingers, and they took reasonable force to adjust. They feel a little less polished than similar controls on some well-known pan-and-tilt heads that I've used, but the Reach 8's controls were certainly solid and firm.

I took the Reach 8 to a popular soccer field and used it to follow players as they warmed up in the late afternoon sun, and then played under the lights. With the camera's lens at full zoom and the pan-and-tilt drag where I liked it, I could follow a single player smoothly and react to the game.

The action of the tripod and pan-and-tilt head combination was rock solid and smooth. There was no backlash or "spring-back" as I panned to follow the action.

I didn't have a chance to test the Reach 8 in cold or hot temperatures, as the weather was mostly pleasant when I ran my tests. While it's possible that most any head can stiffen up in the cold and get loose in the heat, everything about the Reach 8 felt well-engineered to me. I would have preferred a mid-spreader instead of the floor spreader. (It looks as if Secced has mounts for a mid-spreader on the tripod; however, I didn't see an easy way to move the floor spreader higher up on the legs.)

Setting up the Reach 8 was easy enough, considering it's a moderately heavy-duty system. The wedge plate snapped in firmly, and took some thought and effort to release. Considering the payload of the SC-V15/100AH head, I thought the wedge plate looked a little small to hold 30 pounds of precious field equipment; however, it held itself rock steady during my evaluation.

The Reach came with a sturdy carrying bag with plenty of room for accessories and odd production items. The bag is well padded (and thankfully doesn't say "camera tripod" or have any other phrase on it that might tip off thieves). With a weight of 18 pounds, the Reach 8 is not overly heavy, but I wouldn't want to have to lug it a couple of miles into the woods for a shoot.

The adjustments for pan-and-tilt drag had plenty of settings for everyone's preference. Likewise, the counter-balance spring adjustment knob had plenty of settings, but even the lightest setting still had some spring force applied to the tilt motion. I prefer there be a way to disable the spring force completely, in the event you need to use the system with a lightweight camera.

A big knob under the tripod's ball mount made it easy to level the pan-and-tilt head. The built-in bubble level has a button next to it to turn on a bit of night-time illumination. Next to the button is a small compartment that houses the compact battery for this light. I usually carry a small flashlight with me on night shoots, so the illumination isn't usually necessary for me. It's good to know it's there, however.

I do admit to being a bit confused by Secced's specs for the Reach 8 system. In one location, they state that the SC-V15/100AH pan-and-tilt head's capacity is 36 pounds, but in another spot, give it as 46 pounds. Either way, that's a lot of production equipment, and the Reach 8 looks and feels capable of supporting it.

Built in China, the Secced Reach 8 isn't quite up to the look and feel of similarly capable gear from some better-known manufacturers. On the other hand, the Reach 8 costs perhaps 60 percent of what a camera support system from one of those other companies goes for. Considering the beefy construction and smooth operation, a bit less finesse for a lot lower price just might be a good tradeoff.

One final thought I had about the Reach 8 was the availability and cost of replacement parts, as a camera support system can take a beating in the field. If Secced can maintain prices and support its products as well as it builds them, it will sell plenty of Reach 8 systems. This is a solid product at a pleasant price.

Bob Kovacs is a TV engineer and video producer/director. He can be reached at bob@bobkovacs.com.