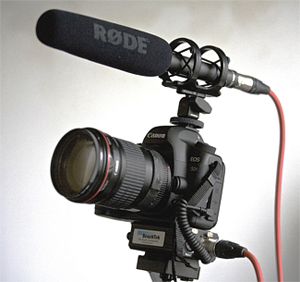 The Røde NTG 2 shotgun microphone
While HDSLRs offer phenomenal video quality in a compact package at an affordable price, audio recording is somewhat of a challenge and remains the weak link in the production loop. A key factor is that their onboard mics are so small that they make lavs look big, and the only audio input is mini-pin, which is mono with no headphone jack or other audio monitoring option.

Using a pro mic of any kind, especially a shotgun, with HDSLRs can make a major difference. To do that requires an external audio (box) adapter with XLR audio inputs with level adjustment at mic or line level, an adjustable headphone jack, and the ability to provide phantom power, should it be needed. There are a few such options on the market now, which means that you may be able to use the pro mics you already own, or you can search for a lighter and more compact mic, optimized for use with an HDSLR, as I did.

After researching relatively lightweight shotgun, I zeroed in on a shotgun type— Røde's NTG 2, a super cardioid condenser mic—that had been mentioned by many HDSLR users in forums on the subject. With a length of 11-inches, it has about the same form factor as a standard shotgun microphone. And as it weighs only 5.17 oz. (sans battery), it's light enough not to skew the balance on your DSLR rig. One really handy feature is that it can be powered with ordinary 1.5V AA batteries, as well as via 48 Volt phantom power.

The NTG 2's specs are all in the right range for most pro applications. They include a sensitivity of 36 dB +/- 2 dB, and a fairly impressive S/N ratio of 76 dB. The mic's frequency range is fairly typical too—from 20 Hz to 20 kHz, but there's a selectable high-pass 80 Hz filter, should you want to attenuate any undesirable lower frequency sounds. It also has low noise SMT circuitry designed to minimize handling noise.

The NTG 2 provides a balanced low impedance output, and is designed to capture broadcast quality audio for professional film, TV, video and audio applications, including voiceovers. It has a tight enough polar response for many voice applications, yet it's not too tight for natural sound recording.

The NTG 2 comes with a foam wind screen, a mic stand mount and a zip pouch. I didn't have any fresh AA cells on hand and initially connected it to a Beachtek DXA XLR adapter, which doubles as a 48 Volt phantom power source. I did have to boost the gain level on the DXA's monitor pod a fair bit in order to get a good signal though. (When I did try it with AA cell power, the pickup seemed to improve slightly.)

At first, I hand held the NTG2 and was impressed by the low noise level, even when I was moving around with it, as long as it was gripped firmly. It performed perfectly as a handheld mic for interviews, consistently delivering a clean, relatively noiseless signal.

Next, I tried it in another manufacturer's mic mount designed for use on a camera shoe. This particular one has a simple shock mount built-in, and the pickup seemed even cleaner and crisper than when handheld.

I used the NTG 2 to record ambient sound and a few interviews at a protest rally at a very busy and noisy traffic circle in New York City. My goal was to capture the sounds of the protesters amidst this cacophony of noise.

The NTG 2 was mounted atop a Frezzi rig handle, swung to the left of the camera, and facing forward, at roughly 45 degrees from the lens. I wanted the mic aimed at the main sound source without it picking up camera handling noise (or blocking my vision). It was also critical that the mic not intrude into my shot when the lens was fully zoomed out.

The lens on the Canon 7D that I used was wide enough to enable me to get within two to five feet of anyone speaking on camera. When in that zone, with volume at 70 to 80 percent on the Beachtek, interviews and candid sound bites were perfectly legible with more than ample separation between the speaker and crowd noise. However, the NTG's polar pattern was not so tight as to reject all crowd noise, but sufficient for the voices of on-camera speakers to predominate above the surrounding crowd noise. Moreover, the voice quality was pleasing and sounded realistic.

I also used the NTG 2 to record ambient, "nat sound" in an urban area with lots of traffic noise in the background. The polar pattern was broad enough to pick up a mixture of nearby sounds, including the chirping of sparrows, barking of dogs, doors closing, as well as trains, planes and highway traffic in the background at various levels. I also used the high-pass filter to attenuate the sound of a generator located several houses away.

While I did do some of the recording outdoors on a damp day, I didn't use the microphone when it was actually raining. Its pickup seemed normal under damp, though not totally saturated, conditions. I regularly shoot outdoors in both rain and snow and feel that if I protect the NTG 2 as well as I do other mics that I use in such conditions, it should perform credibly in weather extremes.

In terms of ruggedness, I did happen to bang the NTG 2 a few times, including once when I dropped it on a thinly carpeted floor. I'm relieved and pleased to state that the unit performed normally afterwards. The biggest problem I encountered was with the tip of the mic creeping into the shot when I was shooting with the 18 mm lens. I had to position the DSLR support arm further back than I would have otherwise to keep this from happening. Ultimately, I was able to achieve a workable compromise.

The NTG 2 is a well-designed, budget-priced short shotgun mic that appears well suited to a range of professional applications and situations, including those encountered during newsgathering. While it's not designed for use in extreme weather extremes (high humidity and bitter cold), it did perform well outdoors in light rain and at temperatures that ranged in the mid-30s F.

In addition to ENG applications, it provides an economical solution for event videographers who must record the spoken word, often at a modest distance from the camera. With its 80 Hz high-pass filter, it should also work well for recording live music in concert venues, as well as in smaller clubs. Moreover, due to its light weight, (especially without a 1.5V AA cell inside), it's a good choice for use with DSLRs and smaller camcorders.

Carl Mrozek operates Eagle Eye Media, based in Buffalo, N.Y., which specializes in wildlife and outdoor subjects. His work regularly appears on the Discovery Channel, The Weather Channel, CBS, PBS and other networks. Contact him at eagleye11@gmail.com.