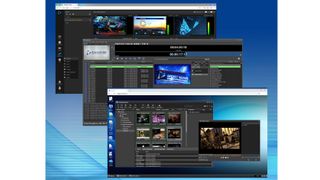 WEST PALM BEACH, Fla.—PlayBox Neo has shared new updates to its AirBox broadcast playout system’s 1U and 3U Neo servers and the IP-based Cloud2TV that are designed to provide additional operating features and increased connectivity.

As part of the update, AirBox Neo has added SRT output support. SRT is designed for fast and reliable file transmission at the application layer with User Datagram Protocol (UDP) as an underlying transport layer. This enables reliable and secure streaming of high quality content via the public internet, PlayBox says. SRT support also offers new Caller, Listener and Rendezvous modes that support connection to the AirBox Neo playout server for more than one location. There are also latency parameter controls and 128/256 bit AES encryption.

An integrated in/output application is also being introduced, which can be shared between AirBox Neo servers and Capture Suite. Connectivity features include NDI output, AJA output plug-in and AJA input plug-ins plus an HLS input. Simultaneous outputs can be delivered in a choice of video standards and frame rates. On the fly interactive control over any input/output plug-in is also provided.

In addition, PlayBox is offering a web-based multiviewer for AirBox Neo that accepts UHD/HD/SD sources and provides support for AJA, BMD and NDI protocols. The multiviewer includes a dashboard with a built-in resource monitor. Other new features include an NDI input plug-in, internal clock handling and a new device manager for handling live feeds.