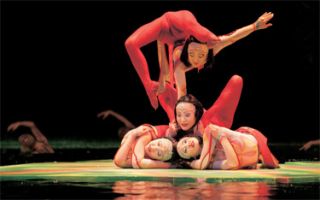 LAS VEGAS—Getting ready to catch that flight to Las Vegas? A little advance research and planning will make your trip all the more enjoyable. Here, let us help.

The Las Vegas Convention and Visitors Authority (LVCVA) offers visitors a wealth of information in its Las Vegas Visitors Guide. The 124-page online publication contains a complete list of The Strip's biggest attractions, things to see and do, shows, area attractions, museums, tours, and transportation and maps. You'll find the guide at www.visitlasvegas.com.

"O" Contortionists at the Bellagio If you're getting hungry, LVCVA says Las Vegas has "every cuisine for every budget." Just looking for a restaurant on The Strip? You can make that choice. Looking for a buffet? According to the dining section of visitlasvegas.com, there are 21 on The Strip to choose from. Or maybe you'd like to get off The Strip after a busy day on the convention floor and you're in search of some Italian pasta. Those are all choices you can make.

One important note: Make your dinner reservations in advance to avoid a wait-time for your meal, especially at the hotels.

SHOWS AFTER THE SHOW FLOOR

You'll find there are quite a few shows for your evening entertainment. This is just a small selection.

Magician David Copperfield has been hailed by audiences and critics as the greatest illusionist of our time. He is at the MGM Grand.

Comedian Tim Allen became famous for his portrayal of a TV handyman on the show "Tool Time," but returns to his roots with stand-up comedy. He's at the Venetian Resort, April 8–9.

Brother/sister act, Donny and Marie Osmond, have had legendary careers recording numerous albums with and without other family members. Donnie and Marie are performing favorites at Flamingo Las Vegas.

George Wallace is also at the Flamingo with his comedy act.

Wolfgang Puck's Trattoria del Lupo Legendary singer/songwriter, Barry Manilow is back at the Paris Las Vegas for a revamped show that highlights his career and his rise to the top.

Along with the numerous taxis and buses on the road there are alternative methods of transportation.

Complete schedule information will be posted in the LVCC, official hotel lobbies, and the NAB Show Program and Exhibit Guide and NAB Show Daily News.

See you at the NAB Show!